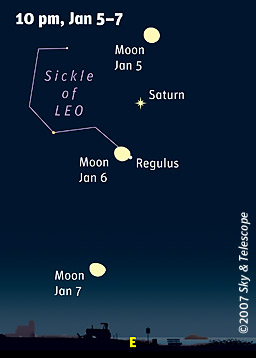 Saturn, Regulus, and the Moon line up in the evening sky on January 5-7.

After several months with no bright planet well placed in the evening sky, Saturn is returning to easy visibility in January. The ringed planet now rises around 8 p.m. at mid-northern latitudes, and it climbs high enough for good telescopic viewing a couple of hours later. By the end of the month, it will be well above the horizon as soon as the sky is fully dark.

Saturn is near the Sickle of Leo, imparting an exotic aspect to this well-known asterism. Unlike dazzling Venus and Jupiter, Saturn is just faint enough to be mistaken for a normal star — though it outshines nearby Regulus, Leo's brightest, by a factor of three or four.

To greet Saturn's return, the waning gibbous Moon will pass by Saturn and Regulus over the next three nights, as shown at right. In fact, the Moon will cover both of these objects for observers in far northeastern Europe (St. Petersburg and beyond) and parts of Siberia. Occultations of Saturn and Regulus will continue throughout 2007, and the paths of visibility will move gradually southward over the course of the year. For additional details, see the January 2007 issue of Sky & Telescope, page 75, or the International Occultation Timing Association website.

Most North Americans won't be able to witness any of these occultations until April at the earliest, but they will see the Moon pass within a degree of Regulus on Saturday, with the closest approach around midnight EST (11 p.m. CST, 10 p.m. MST, and 9 p.m. PST). They should make a fine pair through binoculars, or in a telescope at low magnification.