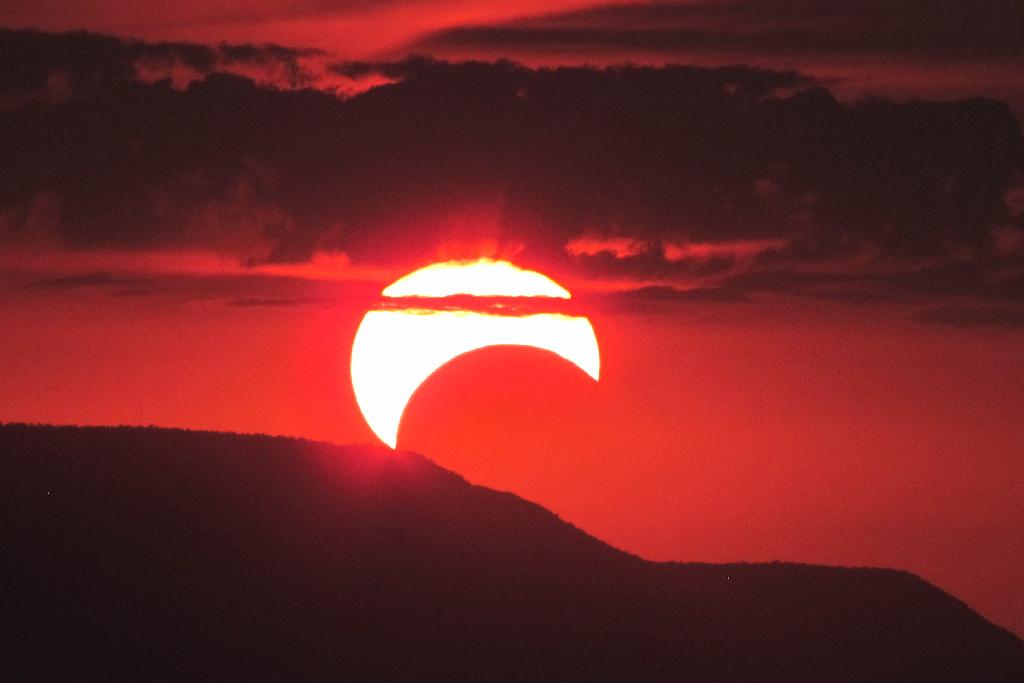 There could not have been a more spectacular and memory-provoking end to a warm Sunday in Arkansas: the spectacular sunset through high clouds in a fiery red sky over Mount Nebo as seen from the western bluffs of Petit Jean Mountain would have been enough to inspire even the dull at mind. But combine that with the Earth's moon moving ever-so-slowly eastward and beginning to cover up the setting sun, as though a giant celestial dragon was chomping at our sun, and nothing short of "wow" would do for the dozen or so spectators who had gathered atop the Palisades overlook to watch the partial solar eclipse setting in the western sky. At about 7:30 p.m. Petit Jean Time, the moon took its first "bite" out of the western edge of the sun as it was still high over Mount Nebo; within an hour, the sun was already setting and the moon had moved as far between the sun and our spectators as it was going to before setting quietly about 8:15 p.m. It was a partial solar eclipse for Arkansas, but for observers farther west, the eclipse was TOTAL, or annular, meaning that the moon had time to completely cover up the sun before it set and present it as a glowing ring of light over distant horizons. But nothing could have been as spectacular as the sight from Arkansas, and particular Petit Jean Mountain, with Mount Nebo, some 45 miles west, presenting a commanding silhouette in front of the far more distant sun.