A new analysis of Edvard Munch's The Scream provides the precise location where Munch and his friends were walking when he saw the blood-red sky depicted in the 1893 painting, as well as an explanation of why the sky appeared to be on fire. Through Munch's journals, topographic analysis, and a connection to the eruption of Krakatoa, proof now exists that the spectacular twilight seen in one of today's most recognizable paintings was inspired by this dramatic event. 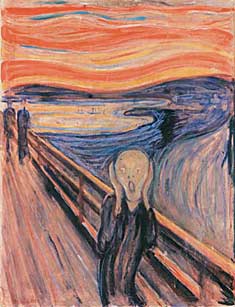 The Scream (1893) by Edvard Munch. Used by permission. Reproduction, including downloading of Munch's works, is prohibited by copyright laws and international conventions without the express written permission of Artists Rights Society, New York. Editors and reporters should contact Marcy Dill for a publication-quality TIFF or JPG of The Scream.

In "When The Sky Ran Red: The Story Behind The Scream," in the February 2004 issue of Sky & Telescope magazine, Donald W. Olson, a physics and astronomy professor at Texas State University, and his colleagues Russell L. Doescher and Marilynn S. Olson reveal how they journeyed to Oslo, Norway, to pinpoint the exact location where Munch stood when he "felt a great, unending scream piercing through nature," inspiring him to put his emotions on canvas.

They determined that Munch and his friends were walking along a road once called Ljabrochausséen, which is now a modern roadway called Mosseveien. It was along the railing of Ljabrochausséen that Munch became overwhelmed with emotion. Olson and his team located a rocky hillside overlook that precisely matches the artist's vista of Christiania (now Oslo) harbor and Hovedø island.

The researchers also debunked an earlier notion that the inspiration for the painting occurred in the autumn of 1891. Munch painted the most famous version of The Scream in 1893 as part of The Frieze of Life, a group of works derived from his personal experiences. The works in The Frieze of Life were painted in the 1890s, but many of them have established origins in the preceding decades. 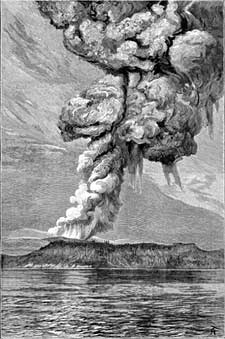 This woodcut of volcanic activity at Krakatoa appeared in the London illustrated paper, The Graphic, on August 11, 1883. Later that month the island blew itself apart.

"The majority of those paintings reflect experiences that happened to Munch many years earlier," says Olson. "The death paintings are particularly clear. Death of the Mother and Death in the Sick Room, done in the 1890s, are based on the death of his mother in 1868 and the death of his sister in 1877. These experiences haunted him the rest of his life, as did the lurid, blood-red sky."

After studying Munch's journals and investigating sky phenomena that might have created the "blood-red sky," Olson and his colleagues determined that it was the eruption of Krakatoa volcano that produced the colorful twilights. Krakatoa exploded on August 27, 1883, sending dust and gases high into the atmosphere. Reports collected by the Royal Society in London show that unusually red twilight glows appeared in Norway from late November 1883 through the middle of February 1884. The spectacle was widely seen, as Christiania's daily newspaper reported on November 30, 1883.

"One of the high points of our research trip to Oslo came when we rounded a bend in the road and realized we were standing in the exact spot where Munch had been 120 years ago," Olson recalls. "It was very satisfying to stand in the exact spot where an artist had his experience," he adds. "The real importance of finding the location, though, was to determine the direction of view in the painting. We could see that Munch was looking to the southwest — exactly where the Krakatoa twilights appeared in the winter of 1883-84."

The February 2004 issue of Sky & Telescope will be on sale at newsstands worldwide from January 6th to February 2nd. Due to the great interest in "When the Sky Ran Red: The Story Behind The Scream," we are making this article available immediately via our S&T Magazine Archive:

Editors and producers may request a free copy of the PDF from Marcy Dill (855-638-5388 x143, [email protected]). S&T Magazine Archive subscribers may download the 1-megabyte PDF file for free after logging in at SkyandTelescope.com. Nonsubscribers (i.e., members of the general public) may purchase the PDF a la carte for $2.95.

To open the PDF you will need a copy of the free Adobe Reader, which is available for PCs, Macs, and Unix-based computers on Adobe's Web site.

Sky Publishing Corp. was founded in 1941 by Charles A. Federer Jr. and Helen Spence Federer, the original editors of Sky & Telescope magazine. The company's headquarters are in Cambridge, Massachusetts, near the Harvard-Smithsonian Center for Astrophysics. In addition to Sky & Telescope and SkyandTelescope.com, the company publishes two annual magazines, SkyWatch and Beautiful Universe, as well as books, calendars, star atlases, posters, prints, globes, and other fine astronomy products.