Don't Get Snookered by Mars Malarkey

Note to Editors/Producers: This release is accompanied by several publication-quality graphics; see details below.

If no one has asked you about it yet, they probably will. A bogus e-mail chain letter, sometimes titled "Mars Spectacular," has been spreading across the Internet. It claims that on August 27th the planet Mars will dazzle the world, appearing brighter than ever in history and "as large as the full Moon to the naked eye."

The problem is that "August 27th" is actually August 27, 2003. Mars did make a historically close pass by Earth at that time. The Red Planet puts on another fine show in 2005, but it will pass closest to us in October and November this year, not August. And to the naked eye Mars will look like a bright star, nowhere near as big or brilliant as the full Moon.

In late August 2003 Mars came within 35 million miles of Earth, but at its best in late October and early November 2005 it will come no closer than 43 million miles. For reference, the Moon orbits the Earth at an average distance of about 240,000 miles, and the average Earth–Sun distance is about 93 million miles.

The notion that Mars can look as large as the full Moon is not as crazy as it sounds. To the naked eye, the Moon appears roughly ½° across, about the width of the tip of your little finger seen at arm's length. Later this year Mars will reach a maximum apparent diameter of only 20 arcseconds, compared to 25 arcseconds in 2003. That's equivalent to 0.005°, which is much too small an angle to resolve with the unaided eye. But if you observe Mars in a telescope at a magnification of 100x, the planet's angular size in the eyepiece is 0.5°. In other words, Mars in a telescope looks as large as the Moon to the naked eye.

Think about the level of detail you can see on the Moon just by looking up. People see all sorts of fanciful shapes in the pattern of dark splotches and bright areas, such as a human face or a rabbit. In a telescope at high magnification, you can see a similar level of detail on Mars: dark surface markings, bright clouds, and often a white polar ice cap. Backyard stargazers the world over are already enjoying telescopic views of these features every clear night.

That's right: You don't have to wait till October or November to see Mars. And this week it's especially easy to find the Red Planet. Go outside a little before midnight, and look toward the east-northeast to find the rising Moon, now in its waning gibbous phase. On Tuesday night, August 23rd, Mars shines to the lower left of the Moon. The next night, August 24th, the planet gleams closer to the Moon's lower right. And on Thursday the 25th, Mars is farther to the Moon's upper right. There's no chance of misidentifying Mars. The planet is the brightest "star" in the sky, and its distinctive ochre hue gives it away in an instant.

You can read all about this year's Mars apparition, and what to observe for yourself, in the September 2005 issue of Sky & Telescope. The magazine's Web site, SkyandTelescope.com, features an interactive Mars map that enables you to identify the features you see on the Red Planet in your telescope; see Observing > Celestial Objects > Planets. The most recent amateur images of Mars appear online at MarsWatch 2005.

"The Mars chain letter is a good thing, not a bad thing," says Alan MacRobert, a senior editor of Sky & Telescope. "It's an immunization. If you make a fool of yourself by sending it to your friends and family, you'll be less likely to send them the next e-mail chain letter you get, which may not be so harmless."

Sky & Telescope is pleased to make the following graphics available to our colleagues in the news media. Permission is granted for one-time, nonexclusive use in print and broadcast media, as long as appropriate credits (as noted in each caption) are included. Web publication must include a link to SkyandTelescope.com. 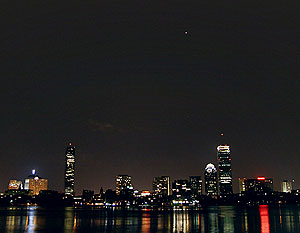 Mars rises over Boston's Back Bay skyline in late August 2003, when the Red Planet made a historically close approach to Earth. The scene will repeat in late October and early November 2005, though Mars will be a little fainter than it was in 2003. Click on the image to download a publication-quality version (3.2-megabyte JPEG) by anonymous FTP. 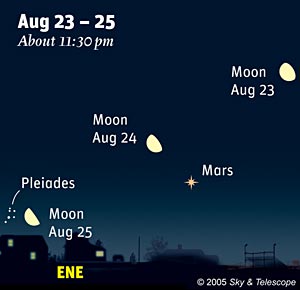 From August 23 to 25, 2005, the waning gibbous Moon serves as a useful pointer to Mars once both are up in the late evening. Click on the image to download a publication-quality version (241-kilobyte JPEG) by anonymous FTP. 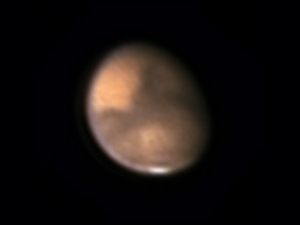