Note to Editors/Producers: This release is accompanied by publication-quality graphics and broadcast-quality videos; see details below.

Solar eclipses are grand cosmic events that no nature-watcher wants to miss — and an opportunity to see one will occur for most of the southern United States on Friday afternoon, April 8th.

This will be only a partial eclipse, which is not nearly as spectacular as a total one. The Sun will never be completely blacked out by the Moon crossing in front of it, and daylight in the U.S. will not dim noticeably. But the eclipse will still provide a fine celestial spectacle — for those who know how to watch it safely.

The farther southeast you are, the deeper the eclipse will be. Along a line from Philadelphia to San Diego, only a slight, barely perceptible dent will appear in the Sun's left edge. But from South Carolina through Texas, the Moon will take a substantial bite out of the Sun. The eclipse will be total along a thin line crossing the South Pacific and annular (a ring of bright Sun completely encircling the dark silhouette of the Moon) along a line crossing parts of Costa Rica, Panama, Colombia, and Venezuela.

The eclipse will also be partial across all of Central America and much of South America.

The partial eclipse will last anywhere from just a few minutes to more than an hour, depending on your location. You'll need to know when it begins, when it reaches maximum, and when it ends at your site. Sky & Telescope has computed a timetable for many cities and towns across North America. It is available here as a 23-kilobyte PDF file, which you can download using anonymous FTP and open on any computer using the free Adobe Reader software.

During a partial or annular eclipse, some of the bright Sun always remains in view. Warning: You should never look at the Sun (partially eclipsed or not) without proper eye protection! Examples are special "eclipse glasses" properly designed for the purpose, a #14 rectangular arc-welder's filter, or special astronomers' solar filters (see our list of solar filter suppliers). Staring at the bright Sun can burn your retina, leaving a permanent blind spot in the center of your vision. The only reason a partial eclipse poses a special danger is because it can prompt people to look directly at the Sun, something they wouldn't normally do. See our complete descriptions of the various ways to watch safely.

More about this eclipse appears in the April 2005 issue of Sky & Telescope, the Essential Magazine of Astronomy.

Sky & Telescope is making the following photos, illustrations, and video clips available to the news media. Permission is granted for one-time, nonexclusive use in print and broadcast media, as long as appropriate credits (as noted in each caption) are included. Web publication must include a link to SkyandTelescope.com.

Skywatchers across much of the southern U.S. can witness a slight partial eclipse of the Sun on Friday, April 8th. The dark silhouette of the Moon will take a small nick out of the Sun's northern edge late in the afternoon as seen from the East, and earlier in the afternoon for locations farther west. Click on the image to download a publication-quality version (53-kilobyte GIF). 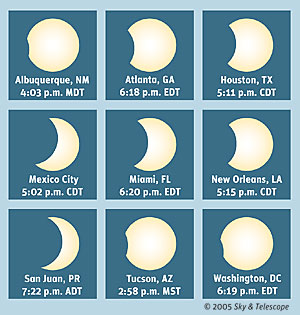 These illustrations show how the Sun will appear from nine North American cities at the time of maximum eclipse (indicated). Click on the image to download a publication-quality version (257-kilobyte JPEG).

A partial eclipse of the Sun was widely visible across the United States on May 10, 1994. This view of the event was captured from Ogunquit, Maine. Click on the image to download a publication-quality version (500-kilobyte JPEG) by anonymous FTP. 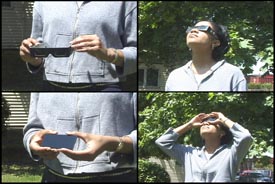 It's not safe to observe the Sun with unprotected eyes, and sunglasses — no matter how dark — are not safe either. Two video clips (TRT: 13.00 each) show the proper use of specially filtered 'eclipse' glasses and a #13 or #14 welder's glass. These can be viewed or downloaded as QuickTime movies, either as low resolution (2.2 megabytes) or broadcast-quality resolution (102 megabytes). 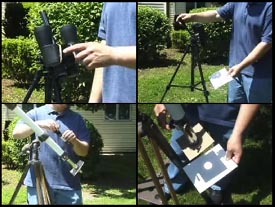 It's not safe to observe the Sun with unprotected eyes, and sunglasses — no matter how dark — are not safe either. Two video clips (TRT: 23.00 and 29.00) show the proper way to project the Sun's image onto a white card using either a pair of binocular or a small telescope. These can be viewed or downloaded as QuickTime movies, either as low resolution (3.5 megabytes) or as broadcast-quality resolution (170 megabytes).