If you've never paid attention to the night sky, now would be a great time to start!

Throughout most of April and May, the five brightest planets — Mercury, Venus, Mars, Jupiter, and Saturn — will cluster together in the western sky at dusk. For several weeks these five worlds, all visible to the unaided eye, will form and reform new patterns as they move against the background stars — a slow-motion line dance that will be fascinating to watch as it progresses.

"Take the time to check this out," advises Alan MacRobert, a senior editor at Sky & Telescope magazine. "All you need to do is note where the Sun sets, then watch that general area of the sky as twilight darkens."

Several evenings during the seven-week-long display hold the promise of especially attractive arrangements. For example, on April 17th all five planets, together with a thin crescent Moon, organize themselves into an evenly spaced line that begins near the western horizon and stretches upward a third of the way across the sky. On May 14th they'll be clustered within an area only 33° across. The dance culminates on June 3rd with a breathtakingly close pairing of Venus and Jupiter, the two brightest planets.

Even the directionally challenged will have extra support, when backyard skygazers around the world celebrate "Astronomy Day" on Saturday, April 20th. Conceived in 1973, this annual observance typically spawns hundreds of organized events in cities and towns throughout North America and Europe. Especially popular are evening "star parties," at which amateur astronomers trot out their telescopes so that the general public can get an eyeful of the Moon's craters, Saturn's rings, star clusters, and galaxies. The planets now arrayed in the western sky at dusk will make this year's Astronomy Day that much more enjoyable.

Close gatherings of the five "naked-eye" planets are relatively rare, cosmically speaking, occurring roughly every 20 years. At such times these worlds are all on the same side of the Sun in their orbits as seen from Earth's perspective. The last widely visible five-planet bunching was in February 1940 (a tight grouping occurred in May 2000 but was hidden in the Sun's glare). And another good one won't take place until September 2040. Thus, for many of us, this spring's display represents a once-in-a-lifetime opportunity.

More than being a treat for skywatchers, the twilight gathering of planets above the western skyline provides a fine "photo op" for those wanting a memento of the occasion. According to Dennis di Cicco, a veteran astrophotographer and senior editor at Sky & Telescope, "Today's popular point-and-shoot cameras, as well as the new generation of digital cameras, can easily capture this celestial spectacle." Simply place your camera on a firm support, disable the flash, frame the scene in the viewfinder, and open the shutter for a few seconds. If your camera offers manual overrides, set the focus for infinity and the lens to its maximum aperture (lowest f/number). Because twilight changes rapidly, snap a set of "bracketed" exposures lasting from about 1 to 8 seconds each.

Having a tree or building silhouetted in the foreground will make the picture's composition more interesting, di Cicco suggests — and it will help during the processing of your film, since the planets create such small specks on the negative that the frame may look blank and not be printed.

• a timetable describing the planetary patterns visible through early June;

• a comprehensive guide to finding local astronomy clubs and organizations in North America, Europe, Australia, and selected countries in Asia; and

• a backgrounder on Astronomy Day.

In addition, stargazers worldwide can use Sky & Telescope's Interactive Sky Chart to simulate the planetary parade as seen from their particular location. For example, click on the following link to simulate the sky as seen from Miami, Florida, at 8:50 p.m. Eastern Daylight Time on May 14th, the night the planets are bunched closest together: view sky chart. 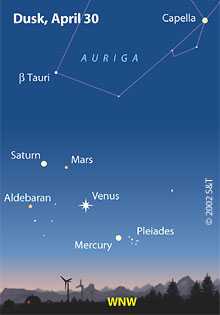 In late April, Mercury climbs higher in the sky each evening after sunset. On April 30th it sits right next to a loose star cluster called the Pleiades. To its upper left, dazzling Venus, Saturn, and relatively faint Mars cluster together; this trio will form a roughly equilateral triangle on the evening of May 5th. Jupiter is outside the frame to the upper left. This view is for observers in mid-North America, but it will be much the same for skywatchers all across the continent and in Europe. 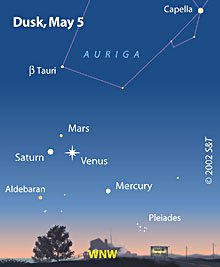 In late April and early May, fast-moving Mercury reaches its highest point in the evening sky. To its upper left, dazzling Venus, Saturn, and relatively faint Mars cluster together; they form a roughly equilateral triangle on the evening of May 5th. Jupiter is outside the frame to the upper left. This view is for observers in mid-North America, but it will be much the same for skywatchers all across the continent and in Europe. 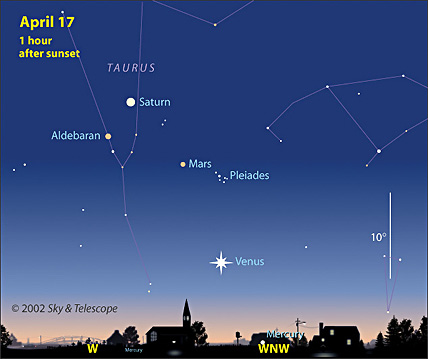 From April through early June, the five naked-eye planets are dancing their way across the western evening sky, forming a variety of attractive patterns as they move against the background stars. This view shows a single frame from an animated GIF image, which is available in two versions: 428 by 359 pixels, 732 kilobytes and 634 by 532 pixels, 925K.