Note to Editors/Producers: This release is accompanied by three publication-quality graphics; see details below.

Treat yourself to an eye-catching celestial treat on Monday evening, February 23, 2004. At dusk, just look to the west. There you'll find Venus, the magnificently brilliant "Evening Star," blazing to the right of the crescent Moon. Provided it's clear, you can't miss this celestial splendor. Venus will outshine every star in the sky and may even appear about as bright as the 3½-day-old Moon itself.

The Moon will have only about 15 percent of its disk illuminated by the Sun. But look closer and you will likely make out the rest of the lunar disk glowing faintly — you may even see the Man in the Moon. This effect is known as earthshine. What you are seeing is reflected sunlight from Earth shining onto the Moon's night landscape, providing a dull illumination.

Venus is so brilliant for two reasons: it's closer to the Sun than Earth so it gets lit more brightly, and its white clouds reflect sunlight very well. Although the Moon and Venus look close together, they're actually at very different distances. On the night of the 23rd, the Moon is 244,000 miles (392,000 kilometers) from Earth, but Venus is 370 times farther: 90 million miles (145 million km) away. Venus is sometimes called our sister planet because it is similar in size to Earth.

For members of the broadcast media, the timing of this celestial pairing will make for a perfect opportunity to take your cameras outside for a live shot during the evening news. Be sure to take advantage.

Sky & Telescope is making the following graphics available to the news media. Permission is granted for one-time, nonexclusive use in print and broadcast media, as long as appropriate credits (as noted in each caption) are included. Web publication must include a link to SkyandTelescope.com. 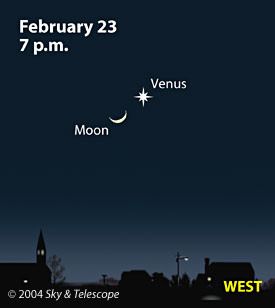 On February 23, 2004, the thin crescent Moon and the brilliant planet Venus will appear close together in the west after sunset. The beautiful pairing will be impossible to miss. Click on the image to download a publication-quality version (64-kilobyte JPEG) by anonymous FTP. 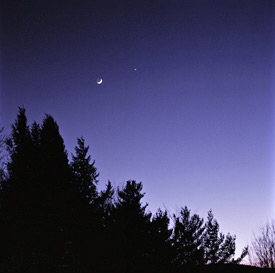 On January 24, 2004, the thin crescent Moon and the brilliant planet Venus shone together in the west after sunset. This view was captured in Springfield, Vermont. On February 23, 2004, the pair will be closer together than seen here. Click on the image to download a publication-quality version (2.1-megabyte JPEG) by anonymous FTP. 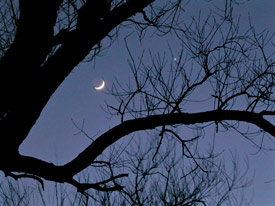 On January 24, 2004, the thin crescent Moon and the brilliant planet Venus shone together in the west after sunset. This view of the pair was captured in Belmont, Massachusetts. Note that in addition to the bright crescent, you can make out the rest of the lunar disk illuminated faintly by earthshine (sunlight reflected from the Earth onto the Moon). Click on the image to download a publication-quality version (2.5-megabyte JPEG) by anonymous FTP.