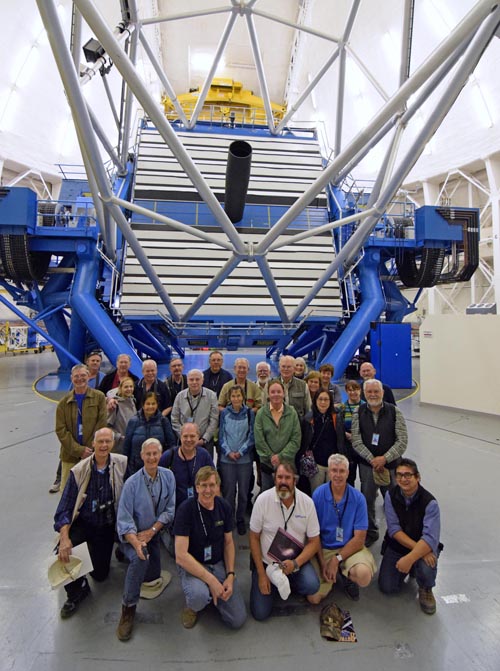 Putting together a week-long travel plan for the Southern Hemisphere's most interesting country, astronomically speaking, is a challenge. Where to go? What to see? But after a year of preparation, Sky & Telescope's recent tour of Chile came off flawlessly and provided its 26 participants with a truly immersive experience.

This was our third foray to Chile (the others were in 2011 and 2014), and as before we worked closely with Gary Spears (Spears Travel) and Silvina Baladron (Frogs Travel) to craft a trip full of astronomical adventures — and a couple of surprises — during our 9 days there.

Once in Santiago, we headed to Cerro Calan, a modest mountain that offers commanding views of the capital city. There we toured Chile's national observatory with Patricio Rojo, a planetary scientist at the University of Chile who specializes in exoplanets. The university's astronomy department is robust, thanks in large part to the country's partnerships with the many professional observatories located there. Each provides Chilean astronomers with 10% of the available observing time.

The Observatorio Astronómico Nacional itself is used only for outreach these days, though it boasts two wonderful old refractors (with 13- and 12-inch apertures) and a modern 18-inch Cassegrain that handles the lion's share of informal stargazing sessions. Nearby sat a huge dome, clearly in disrepair, that Chilean astronomers built in the early 1960s to house a 24-inch research telescope. But that instrument ended up elsewhere, and the dome remains an empty shell to this day.

Most of the major observatories in Chile have weekend days set aside for public visits, but we were fortunate to get exclusive, behind-the-scenes access wherever we went. We flew north to La Serena, a picturesque town on the Pacific coast, and from there headed up the Pan American Highway to Cerro La Silla (2,400 meters high). At its summit is one of two major facilities operated in Chile by the European Southern Observatory, arguably the world's biggest player in professional astronomy. We spent quite a bit of time with the ESO's venerable 3.6-m reflector (installed in 1977) and its 3.6-m New Technology Telescope, a pioneer in the use of adaptive optics.

The next day we drove eastward from La Serena through the fertile Elqui Valley and transferred to the town of Vicuña, which bills itself as the "world's astronomy center." Our itinerary included a double-header — visits to two astronomical citadels in one day. First came Cerro Tololo Inter-American Observatory, not far to the south. CTIO is part of the U.S. National Optical Astronomy Observatory, and its principal instrument is the 4-m Blanco reflector — a twin of the 4-m Mayall telescope on Kitt Peak in Arizona. We also visited a venerable 1.5-m reflector that's been at the summit for 50 years.

We looped back down Cerro Tololo and immediately headed up to neighboring Cerro Pachón. It's home to three major installations: Gemini South (an 8.2-m reflector), the Southern Astrophysical Research Telescope (4.1 m), and the Large Synoptic Survey Telescope (8.4 m, now under construction). Our tour of Gemini impressed all of us with just how big and massive these 8-m-class telescopes are.

Most (but not all) members of the group were amateur astronomers eager to see the southern sky's amazing sights, and they were not disappointed. Chile's regional authorities have embraced all things astronomical, and numerous "tourist observatories" have sprung up to tempt visitors with large-aperture views of the night sky. We checked out four of them.

Observatorio Collowara, located 59 km southeast of La Serena near the mining town of Andacollo, has been around since 2004. This gave everyone their first taste of the breathtaking southern sky. We got great views of Omega Centauri and the Carina Nebula through the 14-inch Meade housed in a permanent dome. We also used a 16-inch Dobsonian outside under the stars.

Observatorio Mamalluca, located 9 km northeast of Vicuña, was a bustling place with multiple observing groups coming and going. First open in 1997, Mamalluca offers several instruments, including a 12-inch telescope equipped with a CCD detector for astrophotography and a big Dob for casual views.

Observatorio del Pangue, 18 km south of Vicuña, boasted some impressive equipment. Staff astronomers "showed us around" with a Meade 16-inch LX200 and a 25-inch Obsession reflector. There's also an Orion SkyQuest 12-inch Dobsonian, but we didn't use it. Nor did we get any time with the facility's 28-inch Reginato reflector or its 20-inch PlaneWave, both of which are used mostly for astrophotography.

San Pedro de Atacama Celestial Explorations (SPACE), not far from San Pedro de Atacama, was the observing highlight of our trip! Created and operated by French astronomer Alain Maury, SPACE is the most well-equipped "tourist" observatory in Chile. It boasts 11 different telescopes: five "big" ones with apertures of 28, 24, and 17.5 inches — and six "small" ones with apertures from 8 to 14 inches. Four of our tour members opted to stay in the adjoining lodge so that they could observe all night.

We reached SPACE, and San Pedro de Atacama, near the end of our trip. You might have heard that Chile's Atacama Desert is among the driest places on Earth — and we can attest to that! The town itself is quite small, though curiously its Padre Le Peige museum has pottery, weapons, mummies, and about 4,000 rakes. San Pedro served as our base for three days of interesting travel.

Arguably our most anticipated destination was the operations and support facility for the Atacama Large Millimeter/submillimeter Array — ALMA for short. This is a $1.5 billion collection of 66 precision radio dishes, 12 and 7 meters across, that has been probing the radio universe since its inauguration in 2013.

The array itself is located on Chajnantor plateau, at the dangerously high altitude of 5,060 m (16,600 feet). We couldn't go there, but ALMA's director allowed us to tour the OSF, not far from San Pedro and at a more reasonable 2,900 m (9,500 feet). Luckily, two of the big 12-m dishes had been hauled down from the plateau for servicing, so we got a chance to check them out at close range. We got another bonus in the ALMA control room, when radio astronomer Richard Simon (visiting from NRAO in the U.S.) took time to explain what the array can do and what it was observing at the time.

It turns out that the ALMA OSF is located at a latitude of –23.1° — not very far from the Tropic of Capricorn. (Recall your grade-school geography: That's the southernmost latitude at which the Sun can appear directly overhead, during December's solstice). A road trip was definitely in order, so our bus zipped down the region's very straight, very desolate road until we reached a curious cross-shaped monument, assembled from plastic pipe, to mark that noteworthy location.

Of course, the trip wasn't totally devoted to astronomical pursuits. While in San Pedro, we assembled well before dawn to head to El Tatio. It's one of the most extensive geyser fields on Earth and — at an altitude of 4,320 m (14,170 feet) — certainly the highest! The thin air and subfreezing predawn temperature contrasted eerily with the hot, steamy mists around us.

One big surprise came shortly after arriving in Vicuña. Just as we were about to head off to Mamalluca Observatory, we got word that Mayor Rafael Vera wanted to meet with us. So we all hustled over to his office for pleasantries and exchanges of small gifts. You can read all about it on the town's website (en español).

Chile is a land of great food and great wine, and we had a chance to sample both. Back at the national observatory, for example, we feasted on tray after tray of hors d'oeuvres as the Sun set over the city below us. It was harvest time in Vicuña, whose abundant grapes go into making the potent distilled liquor called pisco — and of course we just had to find time for a group tasting at Capel, the region's largest pisco producer. And after we returned to Santiago for our flights home, we briefly trekked out of the city to Emiliana, an organic vineyard whose offerings include "Novas" cabernet sauvignon (with the stars of Orion on its label).

There's no way that this brief recap can do justice to the many wonderful sights we enjoyed while in Chile. However, participant Larry Faltz has written about the tour in exquisite detail. Here are his first, second, third, fourth, fifth, and sixth installments, all found in the Westchester Amateur Astronomers SkyWAAtch newsletter.

My previous trip to Chile was a distant 14 years ago, as part of Sky & Telescope's 2003 solar-eclipse expedition. But I likely won't have to wait that long for my next trip: on July 2, 2019, the path of total solar eclipse will cross central Chile and pass right over La Serena and the Elqui Valley. I'm already making plans!