Beyond the Printed Page: Gravitational Waves 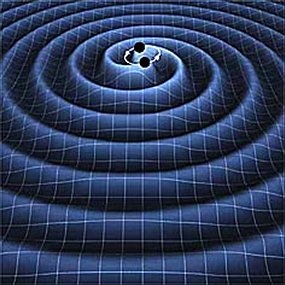 Predicted by Einstein’s theory of general relativity, gravitational waves are essentially ripples in the fabric of spacetime, created by accelerating masses. You can think of them like the ripples created when an oar moves through the surface of a lake. Kind of.

As part of our December 2015 issue’s articles on general relativity and gravitational waves, we’ve compiled some videos to help you grasp both gravity and its waves.

First, what does gravitational radiation do to spacetime? Animations for Physics and Astronomy has put together schematics to show what a linearly polarized gravitational wave does to this fabric. The dots tracing out circles represent points in spacetime; the circles' deformation shows how those points in spacetime change in relation to one another as the wave passes:

Here's what an elliptically polarized gravitational wave does:

The Laser Interferometer Gravitational-Wave Observatory (LIGO), composed of two L-shaped interferometers on opposite sides of the United States, will look for gravitational waves created by exotic phenomena, including neutron stars spiraling in toward each other. Among LIGO’s collection of videos is this award-winning 20-minute documentary from the National Science Foundation.

Not to be outdone, the European Laser Interferometer Space Antenna (now eLISA, for “evolved”) has put together a slew of fun — and sometimes rather dramatic — videos. eLISA will comprise three spacecraft, positioned in a triangle about a million kilometers on a side, that will orbit the Sun as a giant interferometer. Its aim is to detect tiny distortions in spacetime created by white dwarf or black hole binary systems as the two objects spiral in toward each other, ultimately to merge. Related to eLISA, the Albert Einstein Institute in Germany has begun a series of crash-course episodes on the gravitational universe. This first one, below, is called “Einstein’s Gravity”:

Finally, the World Science Festival has posted a 5½-minute discussion of gravitational waves and pulsars; you can find the full hour-long discussion here.