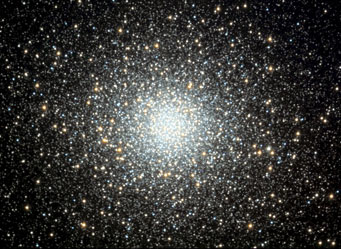 Globular cluster Messier 5 is about 25,000 light-years away in Serpens. Among its hundreds of thousands of stars is at least one millisecond pulsar — possibly one of the most massive neutron stars in our galaxy.

Howard Banich's article "M5 Suprise" in the June 2014 issue of Sky & Telescope explains how to observe the Cepheid variable stars V42 and V84 in the great globular star cluster Messier 5. 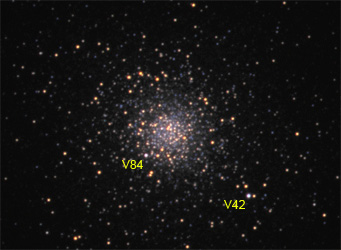 The Cepheid variables V42 and V84 are by far the bluest of Messier 5's bright stars.

Of the two, V42 is much easier to observe; in fact it's the brightest star in the entire cluster when it's near its maximum, around magnitude 10.5. Even at minimum, when it's just ¼ as bright, it's easy to pick out because it's well outside the cluster's dense core.

Banich's article gives predicted maxima for V42 through September, 2014. If you want to observe the star after this, you might want to refer to the page for this star on the website of the American Association of Variable Star Observers, and click on the Ephemeris link to see the ephemerides prepared by AAVSO member Sebastián Otero.

Otero's main source was a comprehensive 2010 study of Cepheid variables in M3 and M5 by Katie Rabidoux (then a graduate student at Michigan State University) and colleagues. Rabidoux et. al. conclude that V84's period fluctuates unpredictably, which is why there is no ephemeris on the AAVSO's web page for V84.

You can, however, see V84 blink in "real time" on Robert Vanderbei's wonderful M5 page. Vanderbei prepared an animated GIF from two M5 photos taken 13 months apart. You can see many RR Lyrae variables twinkling because they changed brightness between the two exposures. V84 is by far the brightest (and bluest) of the twinklers. As luck would have it, you can't see V42 twinkle, because it happened to be fairly close to maximum in both photos.

Vanderbei also used these and other photos to prepare Hertzsprung-Russell diagrams for M5 and many other star clusters, as explained in the December 2010 issue of Sky & Telescope.