Inside the August 2014 Issue 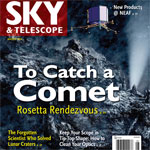 Europe's Rosetta mission is currently in hot pursuit of Comet 67P/ Churyumov-Gerasimenko, set for an August rendezvous. Our cover story goes behind the scenes with the science team to see what the spacecraft can hope to find. Chasing comets brings to mind chasing toddlers, and you'll also find in this issue tips for engaging the youngest members of your next star party. (Conveniently, following that comes an article on cleaning your optics.) And early in the month, Venus and Jupiter will make a beautifully close pairing in the evening sky.

The Comet Chaser
Europe’s Rosetta mission will be the first spacecraft to escort a comet around the Sun and plant a lander on an awakening nucleus.
By Joel Parker

The Forgotten Scientist Who Solved Lunar Craters
By studying World War I battlefields, Charles Gifford developed the theoy that lunar craters were formed by impacts.
By William Sheehan

Toddlers at the Telescope
Have some fun engaging with children ages 5 and younger at your next star party with some tools and tips in hand.
By Alice Altair Enevoldsen

How to Clean Your Optics
Keeping your telescope and eyepieces in tip-top condition doesn’t have to be intimidating or time-consuming.
By Gary Seronik

Earthgrazing Meteors
When a meteor shower’s radiant is low, meteors are infrequent but spectacularly long.
By Don McCarthy

Spring Into NEAF
The annual Northeast Astronomy Forum has something for every amateur astronomer regardless of age, experience, or field of interest.
By Sean Walker

Exclusive NEAF Product Videos by Dennis di Cicco
Watch in-depth interviews with some of the top vendors attending this year's Northeast Astronomy Forum and learn the details of featured and new products.

Toddlers at the Telescope — Further Resources by Monica Young
Find the maps and finder charts you'll need to see the asteroid occultation of July 19, 2014.

How to Read the Night Sky by Alan MacRobert
Use the chart found in every issue (or use our online Interactive Sky Chart) to find your way in the night sky.

Lunar Librations by Sean Walker
Librations and other lunar data for August 2014.

Venus Meets Jupiter at Dawn
The two brightest planets have a remarkably close conjunction in August.
By Fred Schaaf

The Flight of 61 Cygni
Watch the proper motion of this famous double orange dwarf.
By Alan MacRobert

Lunar Highs and Lows
An online tool lets you measure a crater's depth.
By Charles A. Wood