Inside the August 2019 Issue 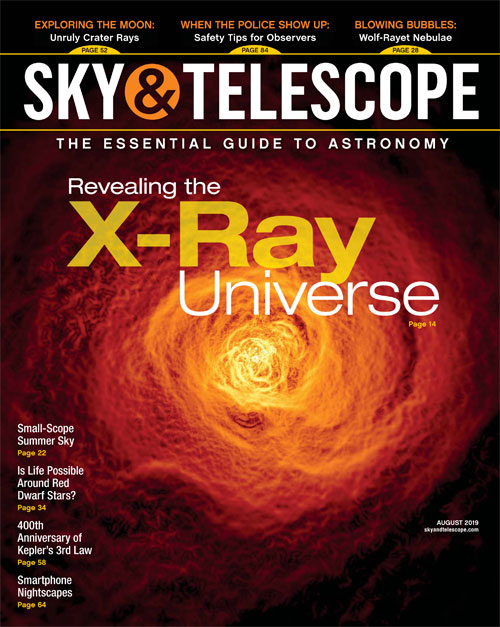 How to Reveal the X-ray Universe, Make a Habitable Planet, and Catch Star-Blown Bubbles 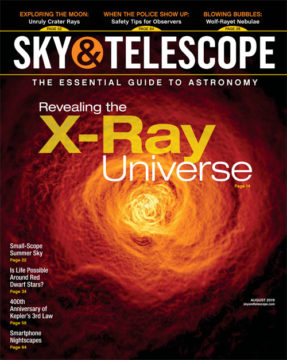 As the Chandra and XMM-Newton X-ray observatories observe two decades in space this year, S&T News Editor Monica Young celebrates the field of X-ray astronomy in our cover story. Since astronomers learned to rise above our atmosphere with the coming of the Space Age, X-rays have opened a new window on the universe. Meanwhile, satellites have played just as large a role in discovering worlds around stars near and far. But how many of these — especially those around volatile but common M dwarfs — are habitable? While August's Perseid meteor shower will compete with a 95%-lit Moon, the shower is long-lived, so head out as early as late July to see it. Meanwhile, the sky holds plenty other treasures, from deep-sky wonders that you can behold even through small telescopes to planets in morning and evening skies, and even three asteroids that are nearing opposition and visible through binoculars. For those with bigger scopes, here's a challenge: spot supernovae before they happen in Wolf-Rayet stars, massive stars already shedding their outer layers. In this issue, you'll also find guides to the evening and morning skies, explorations of lunar craters, and an S&T Test Report on Nikon's mirrorless Z6 camera.

Pioneers of the Invisible Universe
Researchers seeking the X-ray sky revealed a hot, lively, and revolutionary cosmos.
By Monica Young

Small-Scope Summer
Embrace the constraints of a small instrument for deep-sky observing this season.
By Brian Ventrudo

Catch a Wind-blown Bubble
Mysterious in origin and ethereal in nature, Wolf-Rayet nebulae intrigue both observer and reader alike.
By Steve Gottlieb

Red Dwarf Habitability Recipe
Life on worlds around the smallest stars would cope with environments vastly different from our own.
By Igor Palubski & Aomawa Shields

Governing the Planets
This year marks the 400th anniversary of Kepler’s Third Law of Motion.
By F. Michael Witkoski

New LIGO Results: The Full Story
Find out how amateurs can participate in LIGO research.

Two Decades of X-rays
Relive two decades on the frontier of discovery
with Chandra and XMM-Newton.

View the Ice Giants
Find Uranus and Neptune in the summer sky.

Two Large, One Small
The two gas giants continue to enthrall us during the earlier part of the night, while plucky Mercury delights us in the morning.
By Fred Schaaf

Three for One
Three asteroids, traveling conveniently close to one another in the southern sky, come to opposition this month.
By S. N. Johnson-Roehr

The Glorious Eagle
Many lesser-known clusters and nebulae swarm around the mighty Eagle Nebula.
By Sue French

I subscribe to sky and telescope, and I have not got my August issue this is the second time this happened, I am very unhappy that I'm not receiving my issues when I already paid for a yrs subscription. I also cannot download the digital copy from your website, please send me my August issue asap thank you shawn

We have forwarded your request to customer service. In the future, you can email them directly at this email address: [email protected]

I never received an August 2019 print issue either.