Inside the December 2016 Issue 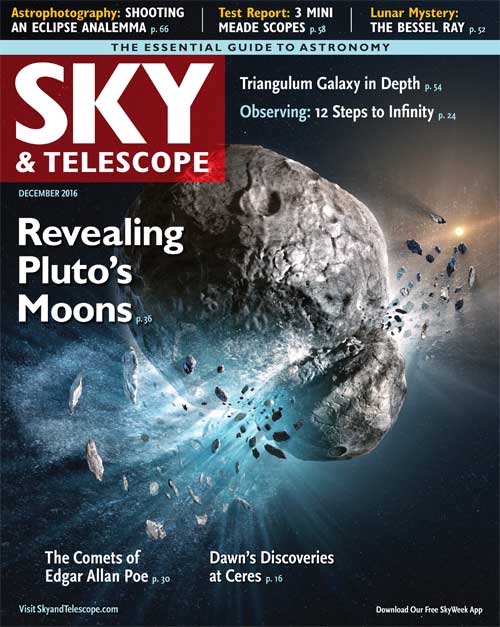 How Many Steps to Infinity?

There's no question that recent space exploration successes are returning dividends. The Dawn spacecraft's visitations to nearby Ceres have turned up extraordinary discoveries. New Horizons, too, is still returning results from the puzzling Plutonian system of moons. (Who would have thought that a dwarf planet would have five moons with such complex orbits and compositions?) But even as we send probes to the edges of our system, only our eyes and minds can go farther than that (for now). Author Mathew Wedel leads us in a cosmic tour through time and space via some easily observed celestial sights. Plus, find information on December's occultation of Aldebaran, as well as the Geminid meteor shower, and take in the sights of a nearby spiral galaxy. Clear skies!

Dawn of Discovery at Ceres
NASA's Dawn spacecraft has found a world of salt deposits, water ice, and potentially even signs of an ancient ocean.
By Marc D. Rayman

Twelve Steps to Infinity
Use these observing favorites to get a sense of our place in cosmic history.
By Mathew Wedel

The Comets of Edgar Allan Poe
Poe had some weird ideas. Where did he get them?
By Donald W. Olson & Shaun B. Ford

Charon and Company
Pluto's five moons proved to be more complicated than the New Horizons team ever imagined.
By J. Kelly Beatty

Targeting the Tutulemma
Here's a unique way to capture the total solar eclipse in 2017.
By Tunç Tezel

Find Your Personal Dawes Limit
Test how close a stellar pair your eyes can resolve using this list of 49 double stars with 6th-magnitude components.

December Occultation Chart for Aldebaran
In December the Moon will once more occult Aldebaran. Find out when it will happen for your location.

Lunar Librations
Librations and other lunar data for December 2016.

Year-End Extravaganza
The final month of 2016 offers views of all five bright planets.
By Fred Schaaf

The Geminids & the Ursids
The Moon messes with one shower, but another comes a week later.
By Alan MacRobert

Make a Seat
A happy butt adds an inch of aperture to your scope.
By Jerry Oltion

M33 in a 10-inch Scope
Take an extended look at one of our close galactic neighbors.
By Sue French