Inside the December 2017 Issue 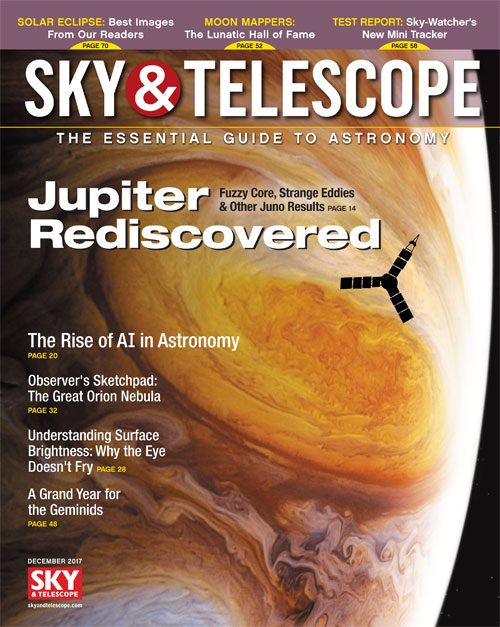 How We See Space: Juno at Jupiter, Machine Learning in Astronomy, Sketching the Stars, and Understanding Surface Brightness

As astronomers we are always looking for new ways to view the universe beyond Earth. In this issue, read how Juno’s first seven orbits are already changing what we know about Jupiter’s atmosphere, composition, and magnetic field. Find out how machines learn to identify gravitational lenses and types of galaxies — and learn how Big Data from vast sky surveys will change the way professional astronomers do astronomy. Peer into the depths of the Great Orion Nebula and its neighbors through the eyes of an observer’s sketchpad. Understand why magnification does not mean more light or greater contrast for your observations with an in-depth exploration of what exactly surface brightness means for an observer. Spot a fifth magnitude open cluster in Cassiopeia, tour craters named for the Lunar Hall of Fame, and read our test report on a new mini tracker. Enjoy these and other stories in the December 2017 issue of Sky & Telescope.

Jupiter Rediscovered
NASA's Juno mission is revealing that our solar system's largest planet is a fantastic, cyclone-festooned world with a strange interior.
By Fran Bagenal

Machines Learning Astronomy
The new era of artificial intelligence and Big Data is changing how we do astronomy.
By Monica Young

Understanding Surface Brightness
It took a while, but the light bulb finally went on above my head
By Jerry Oltion

The Jewel in the Sword
An observer captures on a sketchpad the stunning details of one of the most wondrous objects in the night sky.
By Howard Banich

Autoguiding with PHD2
This open-source freeware can help you take perfectly tracked astrophotos.
By Jerry Lodriguss

Does Dark Energy Change Over Time?
Read the full article about how scientists are considering whether the mysterious “force” accelerating the universe’s expansion changes with time.

Teach Yourself Machine Learning
The upcoming successors of the SDSS will mean a lot of data for astronomers to make sense of. Learn about the tools they will employ to find patterns in the massive influx of information.

Sketching the Great Orion Nebula
In 1659 Christiaan Huygens was first to publish a drawing of M42. Learn how he sketched it and how the author made his sketch of the same nebula, featured in this issue.

A Cornucopia of Celestial Curiosities
The year's end prompts reminiscences of stellar things past.
By Fred Schaaf

Evening Entertainment
Go out early and stay out late to catch the best meteor shower of the year.
By S. N. Johnson-Roehr

Lunar Hall of Fame
Beginning in 1645, obsessed observers drew maps of the Moon's face in ever-greater detail.
By Charles Wood

Deep-Sky Wonders
Look to Cassiopeia for her varied collection of celestial treasure.
By Sue French

I sent this email on 4 Nov. Will it be printed online or in a future published magazine?
Dave Stoltzmann

Jerry Oltion's article "Understanding Surface Brightness" (Dec 2017) discusses retinal illumination issues for extended sources that get imaged onto the retina. But the Figure shown on Page 30 at the top of the page clearly illustrates the question discussed at the beginning of the article, namely, "concentrated light" increasing the illumination level at the eye due to the exit pupil being the image of the "aperture of the solar filter". The flux at the eye's cornea is substantially increased! Even the front cover states the problem as "Why the Eye Doesn't Fry", seemingly asking the same question.

Oltion deals with lots of simple examples of retinal illumination, but forgets to mention that a telescope's concentration of the illumination level at the exit pupil can lead to severe "frying" problems at the cornea, not the retina. In this scenario the telescope is being used as a solar concentrator. Eye Safety Standards exist for both Corneal and Retinal illumination levels, so both need to be considered with optical systems like those discussed in the article. If the solar filter is already "bright" according to Oltion's questioner, then the ratio of the size of the exit pupil to the front filter diameter (the magnification) will dictate a much higher level of corneal illumination, perhaps in the dangerous level category due to the ratios of the two areas. That question is completely ignored in the article, with the author's focus being on retinal illumination only. Oltion answered his own question, not the one posed by club member, and the readers of S&T need to be alerted to the dangers posed at the cornea.

That is why small "solar filters" for use near the eyepiece are no longer sold, as the increased heat level on the filters was dangerous. The user's eye needs the same protection in certain circumstances.