Inside the January 2015 Issue 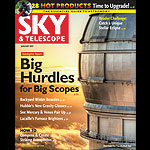 We live in the age of Big Astronomy, where it seems every new telescope is bigger, and supposedly better than the last. But January's cover story issues a cautionary tale. Contributing editor Robert Zimmerman describes the challenges facing four huge scopes — now they serve as potent lessons for the upcoming generation of megatelescopes. We also found that "bigger is better" doesn't necessarily apply to astronomy equipment: in this issue, you'll find your ultimate gear guide to 28 of the hottest products for 2015. Drool over an $15,000 astrograph or pick up that free planetarium app — there's something here for everyone. And January holds many opportunities to use that telescope and all its gadgets, whether they be old or new: check out variable star R Geminorum, eclipsing binary Alpha Comae Berenices, or deep-sky objects galore. Brave the cold and embrace the winter sky!

Hot Products for 2015
Our 17th annual roundup of Hot Products highlights the most intriguing new astronomer gear on the market.
By the Editors of Sky & Telescope

The Backyard Sky: Winter
Embrace the cold nights of winter to observe these seasonal delights.
By Rod Mollise

Flawed Giants
The world's largest optical telescopes have had to overcome serious hurdles, delaying their scientific successes.
By Robert Zimmerman

Composing the Universe
Planning your composition can raise your imaging to a whole new level.
By Robert Gendler

Fighting for Dark Skies
Learn more about one club's battle against light pollution.

Lunar Librations by Sean Walker
Librations and other lunar data for January 2015.

Vigil for a Unique Stellar Eclipse
Against incredible odds, this naked-eye star may self-eclipse for the first time seen.
By Alan MacRobert

An Observational Mystery
What causes Io's enigmatic brightening?
By Thomas A. Dobbins

Yesterday, the digital issue came in, and I immediately scrolled forward to the "75, 50 and 25 years ago" section. Then I grapped my very first S&T issue out of the shelf. Yep, that was the cover thumbnailed in the new issue. I even found the cited text in the News section of the old issue.

Things have changed quite a bit in the past 25 years. As an example, there were some b&w photos of Jupiter in the January 1990 issue, taken on hypered Technical Pan (maybe most current readers don't even know what that means... Kodak Technical Pan was a red-sensitive b&w print film, popular among astrophotographers because it caught H-Alpha light very well; the film could be "baked" in hydrogen or nitrogen gas to drive out the oxygen, thus making it more light-sensitive by several ISO steps, a then popular technique known as "gas hypering"). There were hardly any recognizable details on the pictures except the south tropical belt (and the missing north one). Compare these images with those of Damian Peach in the December 2014 issue. Absolutely stunning. There was also some ad about a Lynx CCD camera with 192 x 165 pixel. Gee. And digital setting circles that could be retrofitted to existing mounts were state of the art, "push-to" rather than "go-to". Maybe you should make an article out of this, amateur astronomy today and in the past.

Thanks for the past 300 issues. I'm looking forward to the coming 25 years of S&T and I'm really wondering, what the magazine and technology will look like, then.