Inside the January 2017 Issue 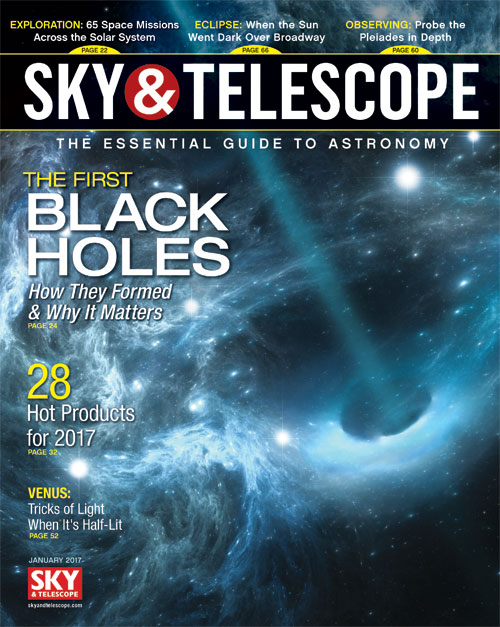 As always in our first issue of the year, Sky & Telescope presents its picks for Hot Products: a fantastic lineup of 28 telescopes, mounts, eyepieces, cameras, software, books, and more. Turn the page to find S&T Science Editor Camille Carlisle tackling the age-old question of how supermassive black holes are born. A little closer to home, contributing editor Howard Banich takes a new look at an old friend: the Pleiades star cluster. You'll also find in the January issue guides to seeing the strong but elusive Quadrantid meteors, and galaxies among Eridanus — not to mention an overhaul of our magazine's design. Enjoy, and clear skies!

Space Missions in 2017
By the Editors of Sky & Telescope

The First Black Holes
Astronomers are laboring to discover how the universe's first supermassive black holes were born.
By Camille M. Carlisle

Hot Products 2017
Our 19th roundup highlights the most intriguing new astronomy gear on the market.
By the Editors of Sky & Telescope

1925: An Eclipse Like No Other
New York's Roaring Twenties eclipse cut the city in half, and not where the crowds expected.
By Eli Maor

Gaia Maps a Million Stars: The Full Story
Read the extended version of our story on Gaia's first data release.

Osiris-REX Launches for Asteroid Bennu
Get all the details on the recent launch of Osiris-REX and its target, the asteroid Bennu.

The Evening Star Reigns Supreme
Venus lights the southwest in twilight, while Mars and Neptune rendezvous nearby.
By Fred Schaaf

A River Full of Galaxies
Plumb the galactic depths of Eridanus this month.
By Sue French

The Perseus Galaxy Cluster
Good dark adaptation is key for viewing this scattering of faint fuzzies.
By Ted Forte

Congrats to the new layout and cover! Definitely an improvement. I started subscribing to S&T 25 years ago and liked the cover with the telescope icon in the upper right and the unintrusive magzine name that left the focus on the cover image, but only after one year, this was replaced with the red box cover that made my favorite magazine look like a cheap tabloid. I hated it ever since, it was not representing the high quality content of the magazine. The new look ist definitely a *big* improvement, back to the roots, with more focus on the cover picture, but absolutely contemporary. This holds for the fresher, more modern look of the interior as well. Well done!

The On-Axis Guider discussed in the "Astronomer's Workbench" column (pages 72-73) is very interesting and novel. However, one has to be a bit careful with the dichroic cold mirror (Edmund Optics, #64451), as it is used in a reflection mode to send visible light to the camera while transmitting the near-IR light to the autoguider. Edmund states that the Borofloat glass substrate can have as much as 4-6 waves of surface irregularity, so it functions as a rather poor "diagonal mirror" for the camera. It is also rather thin with a 3.3mm thickness, so care must be taken when mounting the cold mirror to not warp it, especially when the guider is subjected to temperature extremes. With an f/10 SCT the off-axis star images can be astigmatic. If the cold mirror is used with focal ratios of f/6 or less, almost certainly the off-axis star images will evidence astigmatism or coma.