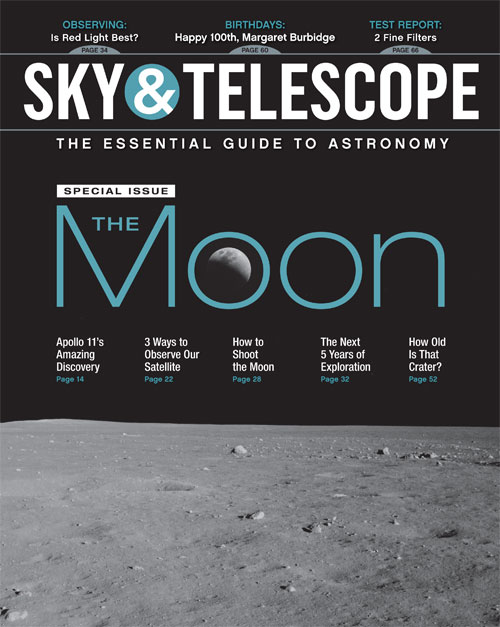 Celebrating the 50th Anniversary of Apollo with a Look Back, a Look Forward, and a Look Up 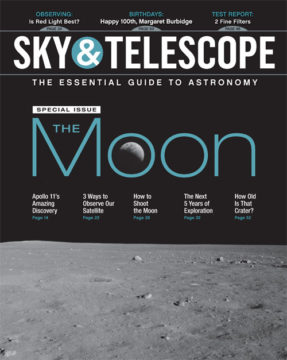 We're celebrating the Moon in the July issue of Sky & Telescope, for obvious reasons. July marks the 50th anniversary of the Apollo 11 Moon landing. Not only did the Apollo missions change history, they also transformed how we understand the Moon, a story covered by planetary scientist John Wood. They also changed how we see the Moon, literally. As a nearby world that we can visit, the Moon's surface features carry that much more interest, and Bob King provides an overview of top lunar sights. Then Sky & Telescope's Sean Walker shows us how to photograph the Moon — and it's not as hard as you might think! Finally, we look at what the future of Moon exploration might hold in a two-page infographic, which provides a detailed guide of the plethora of missions heading Moon-ward in just the next five years. Meanwhile, the rest of the sky doesn't disappoint: Saturn and Jupiter provide company all night long, Uranus, Neptune, and Pluto are all well-placed for viewing, and the end of the month could bring a sprinkling of meteors with the Delta Aquariid shower. In this issue you'll also find a reader testing the notion that red lights save your dark-adapted vision, we celebrate the birthday of a major figure in 20th century astronomy, and we explore the deep sky in Hercules and Ophiuchus.

The Science of Apollo
Samples brought back by the astronauts revolutionized our picture of the Moon.
By John A. Wood

The Moon Three Ways
Celebrate the anniversary of the Apollo 11 mission by kick-starting your lunar observing.
By Bob King

Targeting Luna
Taking photos of the Moon can be as simple as you want it to be.
By Sean Walker

(Back) to the Moon
What will the next five years of lunar exploration look like?
By Monica Young & Terri Dubé

Happy Birthday, Margaret
The astronomer who taught us we are all made of stardust will celebrate her 100th birthday on August 12th.
By Benjamin Skuse

Watch New Horizons Fly By Ultima Thule
Brian May of Queen fame composed the soundtrack to the approach and whizz past Kuiper Belt object Ultima Thule.

Free Moon App: Moon Globe
Visiting the Moon is easier with this straightforward (and free!) Moon atlas in hand. (The app is available for iOS devices.)

Gas Giant Gaze
Three bright planets leave us for a while, but the two that remain accompany us throughout the night.
By Fred Schaaf

Finding Pluto
All it takes is planning and patience to find the most beloved dwarf planet.
By S. N. Johnson-Roehr

How Old Is That Crater?
A new crater-dating technique yields new insights into what you see on the Moon.
By Charles Wood

Heavenly Hero
Hercules strides across the summer sky, carrying with him an abundance of deep-sky wonders.
By Sue French