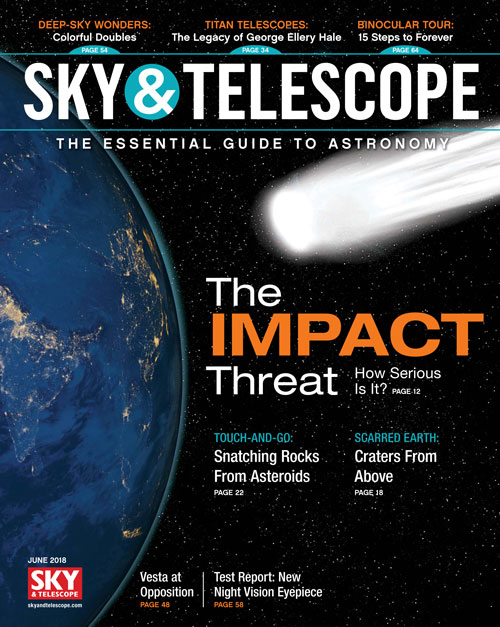 In the June 2018 issue of Sky & Telescope, learn all about asteroids and other small solar system bodies. What threat do they pose to the Earth? Where have they hit before and what do those scars look like now? What are they made of and how will we find out? Plus, learn how to use eXcalibrator to color correct your astroimages. Take a journey through George Ellery Hale's life and learn about the telescopes he developed. Then hop across the sky in 15 steps that include one of almost every important category of astronomical object. In this issue, we also share our test report on a light-amplifying observing system. Check out our observing picks for the month, discover evidence of submarine lunar craters, and catch Vesta at its best! Enjoy these and other stories in the June 2018 issue of Sky & Telescope.

Space Invaders
How grave is the threat that a giant asteroid or comet could strike Earth and do us serious harm?
By Peter Tyson

Cataclysms from Above
There’s more to see from your airplane window than the sky.
By Ralph D. Lorenz

Space Rock Rendezvous
This summer, two spacecraft will bear down on their target asteroids, preparing to snatch rubble and bring it home to scientists.
By Dan Durda

Is That Star Blue or Green?
The eXcalibrator freeware program helps to take the guesswork out of color-balancing your deep-sky images.
By Bob Franke

Fifteen Steps to Forever
Use these well-known observing targets as incremental stepping stones into the cosmic past.
By Mathew Wedel

Download eXcalibrator
In June's issue you'll learn to use this software to make sure the colors in your deep-sky images are true to life!

Leap With A Gazelle
This asterism is all about pairs of stars, and pairs within pairs.
By Fred Schaaf

Vesta at Its Best
Asteroid 4 Vesta is closest this month, a lustrous light in the southern sky.
By S. N. Johnson-Roehr

Shining Jewels
Determining the colors of double stars — sometimes brilliant, sometimes subtle — can be tricky even for experienced observers.
By Sue French

Visit this site in order to subscribe: https://ssl.palmcoastd.com/03401/apps/K_KEYS?ikey=I**K01
Best,
Janine