Inside the March 2015 Issue 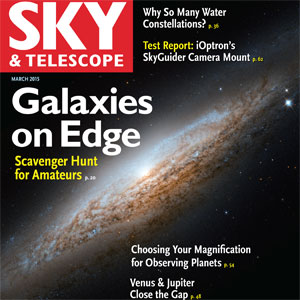 Spiral galaxies stun the viewer, yet they have even more visual power when serendipitously aligned to our line of sight. Ted Forte leads a tour of a variety of edge-on galaxies in March's cover story. Peering beyond the edge provides a different perspective on our solar system too. Further even than distant Pluto and its Kuiper Belt friends lies the mysterious Oort Cloud, a comet reservoir containing trillions of objects — only two of which have been detected so far. Scott S. Sheppard discusses the hunt for objects at the edge of the solar system. And Nola Taylor Redd writes about similar reservoirs around pulsars and other burnt-out stars too, perhaps forming phoenix planets that arise from stellar ashes. Finally, going from edge-on to cutting-edge: we also feature 14 must-have astronomy apps that you'll definitely want to download for your smart device.

Edge-On Galaxies
There's something special about these slender streaks of light and dust.
By Ted Forte

Beyond the Kuiper Belt
Many bodies likely lurk in the sprawling emptiness that fringes our solar system. Where are they, and how did they get there?
By Scott S. Sheppard

Phoenix Planets
The death of a star often has fatal consequences for orbiting planets. But for some worlds, the end of the stellar line could mean a brand-new start.
By Nola Taylor Redd

The Very Ancient Origins of the Water Constellations
Before written history began, Capricornus was likely a goat-boat and Aquarius was a god pouring water.
By Craig Crossen

App-Powered Astronomy by Monica Young
Find links to the must-have astronomy apps listed in this issue.

Explore Vesta
View Dawn's high-res map of the asteroid it circled for more than a year.

Lunar Librations by Sean Walker
Librations and other lunar data for March 2015.

Powering Up
Choose the right magnification for your planetary observing experience.
By Thomas A. Dobbins

iOptron's SkyGuider
Here's a sturdy camera tracker for nightscape photographers on the go.
By Jerry Lodriguss