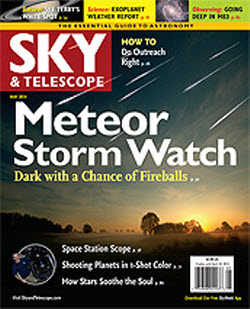 Get the latest on the new meteor storm predicted to hit Earth's skies on May 24th, and learn about the even weirder weather developing on alien worlds beyond the solar system. Also catch up on techniques to observe Saturn at opposition and learn about a possible new comet that's gracing our skies.

Astronomers have gone beyond merely counting exoplanets to studying their atmospheres.
By Jonathan Fortney

With a showbiz attitude and some preparation, you can spread your passion for astronomy to the local community.
By Mark Steven Williams

Bright meteors could streak from the northern sky on the morning of May 24th.
By Joe Rao

HyperStar on the ISS
An optical system developed for amateur astronomers goes to the International Space Station.
By David H. Levy

Redeeming Color Planetary Cameras
Advances in imaging technology should make amateurs give these cameras a second look.
By Dan Llewellyn

Catch a Comet Buzzing Earth by Tony Flanders
Watch for Comet 209P/LINEAR on May 29th, one of the closest comet passes in history.

Learn to Star Hop by Alan MacRobert
Discover the night sky by learning to use a map at the telescope.

Lunar Librations by Sean Walker
Librations and other lunar data for May 2014.

The ringed planet is at opposition to the Sun this month.
By Fred Schaaf

A comet is sailing by the Big Dipper, glowing at 7th or 8th magnitude. We think.
By Alan MacRobert

Some remarkable spiral galaxies swarm around the star 6 Comae.
By Sue French