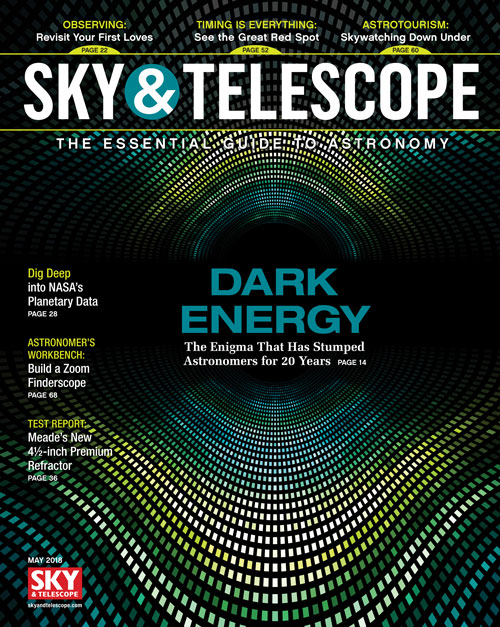 In the May 2018 issue of Sky & Telescope, explore mysteries of space. What is dark energy (will we find out in our own lifetime?) Visit (or revisit) some of the most showstopping objects to view through a telescope. Learn how to access NASA mission data from the Planetary Data System so that you can process stunning images from Cassini and more! Journey into the Australian interior to see the treasure trove of a truly dark Southern Hemisphere sky. In this issue, we also share our test report on Meade's 115-millimeter ED Triplet. Check out our observing picks for the month, and become an expert at spotting the Great Red Spot! Enjoy these and other stories in the May 2018 issue of Sky & Telescope.

The Dark Energy Enigma
Twenty years after they discovered cosmic expansion is accelerating, astronomers are still working hard to understand why it’s happening.
By Marcus Woo

A Journey to the Dark Site of the Earth
A trip Down Under offered these observers their best views of some dramatic, deep-sky sights.
By Jurij Stare & Zbigniew Zembaty

Meade’s 115mm ED Triplet
This 4.5-inch apochromat packs a lot of bang for the buck.
By Rod Mollise

Akatsuki’s Amazing Views of Venus
Almost everyone considered Japan's Venus-bound orbiter a lost cause, but Akatsuki survived, reached its objective, and is wowing scientists with results.

Solar Eclipse Made Bow Waves in Earth’s Atmosphere
New research shows that the supersonic motion of the Moon's shadow across the continental U.S. in August 2017 created bow waves in Earth's atmosphere.

In the Path of the Closest Comet
From Draco to Cancer a comet hurtled.
By Fred Schaaf

Jupiter, By Jove!
The solar system's greatest gas giant puts in a bold appearance this month.
By S. N. Johnson-Roehr

Spotting Jupiter's Spot
Timing is everything when it comes to glimpsing the iconic Great Red Spot. Steady seeing helps too.
By J. Kelly Beatty

The Star-Clad Maiden
Visit Virgo to find these exemplary galaxies of spring.
By Sue French

I'm confused by Jerry Oltion's response to David Stoltzman's letter in the May 2018 issue. Mr. Oltion asserts that we should not view the sun at magnifications in excess of about 300x. It would seem to me that increasing magnification would not concentrate light at the cornea or the retina, but would instead reduce it. http://www.bbastrodesigns.com/Telescope%20Magnification.html

A good way to consider this question is to think of magnification as compressing the light that enters the telescope down into a beam that's small enough to enter your eye. It stands to reason that when you do that, the intensity of the light hitting your cornea is greater than the intensity of the light passing through a similar sized spot on the solar filter. The increase in intensity is proportional to the square of the magnification, so to counter the 100,000-fold decrease in light intensity provided by a solar filter, you take the square root of 100,000 and get 316 power. That's the magnification at which the light hitting your cornea is equivalent to the amount of light that hits the cornea under normal sunlight without a telescope or solar filter involved.

Bear in mind that the intensity at the retina is different! After passing through the eye's lens, the light beam is spread out again, and that spreading out reduces the intensity per unit of area. As I wrote in my article, that intensity will never exceed the surface brightness of the object being observed, so the retina is safe at any magnification so long as you're looking through a safe solar filter.