Inside the October 2019 Issue 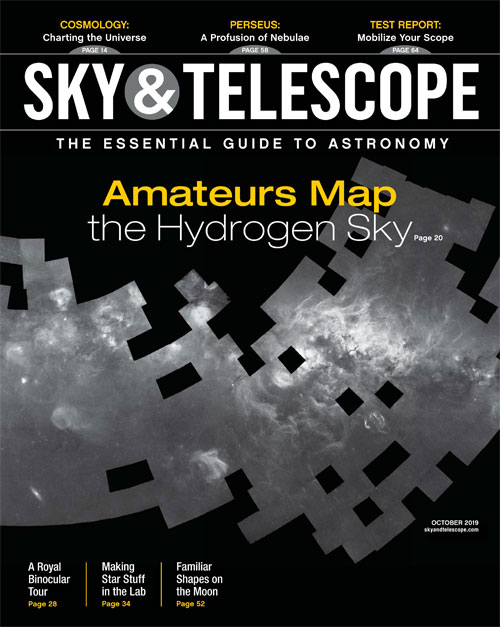 Mapping the Sky — from the Milky Way to the Local Group, and Beyond 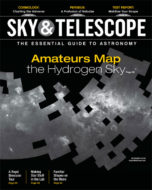 Telescopes map the night sky near and far in October's issue of Sky & Telescope. In our cover story, Senior Contributing Editor Dennis di Cicco reveals the first results from the sky survey that he has been working on with S&T editor Sean Walker and fellow amateur astronomer David Mittelman. In a years-long project, the three astrophotographers have been working to map the sky at the deep-red wavelength emitted by hydrogen alpha — and the images are stunning. Cosmologists, too, have been working on charting our place in the universe. Galaxies swim in the currents of a gravitationally bound sea, and two astronomers have worked hard to understand how those currents flow. Ground your own observations with King and Queen of the northern night sky — Mat Wedel offers a binocular tour of Cassiopeia and Cepheus. In this issue, you'll also find a new way to look at the Moon, a guide to October's Orionid meteor shower, and a tour through the celestial clouds of Perseus. Plus, don't miss a feature article on how astronomers have made stars — in the lab!

Cosmic Mariners
Astronomers chart the vastness of space by tracking the currents that galaxies swim in.
By Noam I. Libeskind & Yehuda Hoffman

The MDW Sky Survey
A collaboration among three astrophotography friends is providing a dramatic new look at the glowing hydrogen spread across our Milky Way Galaxy.
By Dennis di Cicco

A Royal Tour
Grab your binoculars to take a closer look at the overflowing coffers of the King and Queen of Aethiopia.
By Mathew Wedel

Lab-made Stars
After centuries of reaching up to study the universe, scientists are making starstuff here on Earth.
By Liz Kruesi

Bright & Dark Clouds in Perseus
Step into Perseus and explore the profusion of celestial clouds that abound there.
By Richard P. Wilds

Nebulae in Perseus
Find coordinates for the bright and dark nebulae that suffuse the Perseus constellation.

Six Planets in the Evening
Venus has returned at dusk, and Mars reappears in the second half of October when it rises at dawn.
By Fred Schaaf

October is for Orionids
Even though observing conditions aren't ideal, you may see a few fireballs this month.
By S. N. Johnson-Roehr

Lunar Pareidolia
Our vivid imagination can make us see more than craters on the Moon.
By Charles Wood

Navigating North America
Knowing your geography puts you one step ahead in finding your way around in this great nebula.
By Sue French