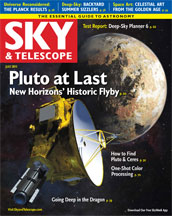 On July 14th, New Horizons will at long last swing past Pluto, collecting better data on this mysterious dwarf planet than we've ever seen before. But, as Emily Lakdawall relates in our cover story, the spectacular data will take many months to trickle in. In the meantime, if you're up for a challenge, you can have your own look at Pluto, and Ceres too, with our detailed sky charts as your guide. You'll find far more to look at in the sky this summer with Rod Mollise's article on summer sensations: start with the Bug Nebula, move on to the Cat's Eye Cluster, and just keep on going. And when the balmy nights fill with clouds, take refuge in Nick Kanas's fascinating and finely illustrated take on the star atlas frontispieces of old.

Pluto At Last
After a 9½-year flight, NASA's New Horizons spacecraft is making a long-awaited visit to Pluto and its moons.
By Emily Lakdawalla

Planck Upholds Standard Cosmology
The latest analysis of the universe's oldest light provides an exquisite look at the cosmos.
By Camille Carlisle

Celestial Frontispieces of the Golden Age
Astronomy-themed art and allegory reached an early peak as illustrators sought to outdo one another.
By Nick Kanas

The Backyard Sky: Summer
Stretch your observing skills to spot these seasonal sensations.
By Rod Mollise

Done in One
Today's one-shot color cameras can take world-class astrophotos. Here's how to do it.
By Warren Keller

Prepping for Pluto
Thanks to NASA's New Horizons spacecraft, we're about to see Pluto up close for the first time. Here are a few snapshots of the scientists and engineers who'll make it possible.

Milky Way's Ripples
Find out more about (and see images of) the waves in our galaxy's disk.

Lunar Librations
Librations and other lunar data for July 2015.

It's Dwarf-Planet Summer
As Dawn and New Horizons watch Ceres and Pluto, you can too.
By Alan MacRobert