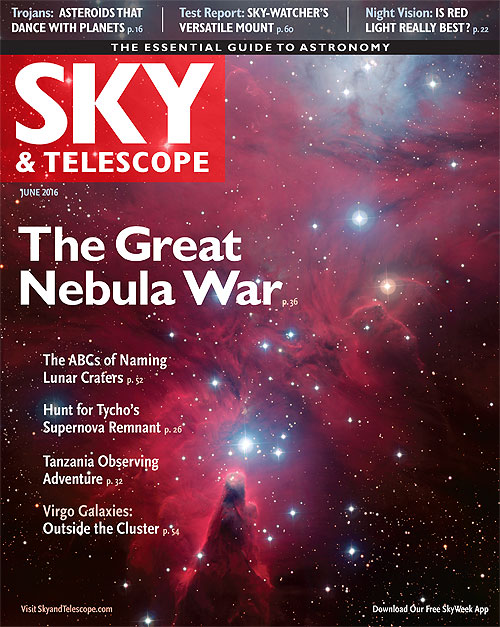 Did you know there are as many asteroids hugging Jupiter in its orbit as there are in the asteroid belt? Astronomer Scott Sheppard sheds light on these so-called Trojans, the dark-red rocks that circle the Sun at gravitationally stable regions ahead and behind Jupiter, Neptune, and even Earth. Then engineer Robert Dick sheds another kind of light when he asks, are red LED lights really the best for observing? The answer, which may surprise you, is already being implemented in Canada's Dark-Sky Preserves. Read on for observing inspiration: spy galaxies in Virgo, find the Moon's smaller craters, explore the Trifid Nebula, see Saturn at opposition, and spot Mars's hard-to-see moons, among many other observing adventures this month.

Is Red Light Really Best?
Astronomers have long used red light to protect their night vision, but there may be a better alternative.
By Robert Dick

The Elusive B Cassiopeiae
Track and capture this supernova remnant with the author.
By David Tosteson

Leo by Night, Lions by Day
Travels to the heart of Africa's national parks for an observing adventure of a lifetime.
By Nick Howes

The Nebula War
A clash between two pioneer sky photographers deepened the growing split between amateur and professional astronomy.
By Alan Hirshfield

Trifid Nebula
Catch up on scientific results from this star-forming cloud with these references.

WFIRST: The Hubble of the Future
Watch a recent Google Hangout with some of the mission’s key players.

Lunar Librations
Librations and other lunar data for June 2016.

Three Planet Night
Jupiter, Saturn, and Mars shine in the dark, Mercury peeks up at dawn.
By Fred Schaaf

Hunt the Moons of Mars
With Mars now big and close, try for Phobos and Deimos.
By Alan MacRobert

Thistledown
Grab hold of these galactic wisps in Virgo.
By Sue French