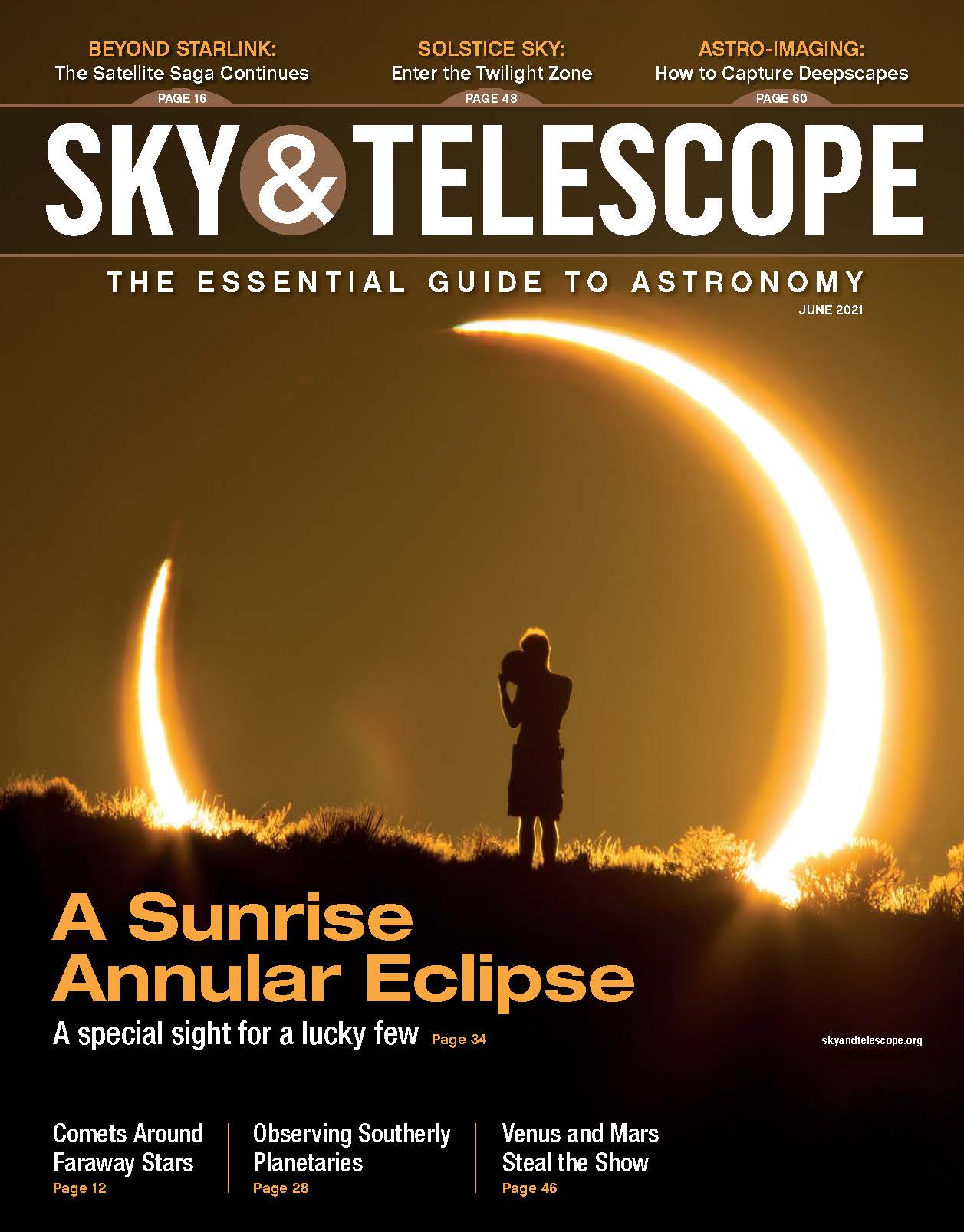 In the June 2021 issue of Sky & Telescope, we’re getting ready for the annular solar eclipse over Canada and the North Pole this month. Joe Rao guides us on how and when to see the Moon’s shadow pass over the Sun. And we report how SpaceX is working with astronomers to mitigate the negative impact of their satellites on astronomy. However, individual companies’ amity won’t be enough to forestall the growing light pollution as tens of thousands of satellites hit the skies in the next few years. Also in this issue, Marybeth Kiczenski explains the “deepscape” technique she used to capture the image of Comet NEOWISE (C/2020 F3) over the Mackinac Bridge, featured in the November 2020 issue. While we enjoyed the comet’s show last summer, astronomers were studying comets in other star systems. We discuss their discoveries along with some interesting new information about the Milky Way’s largest satellite. Several discoveries over the past decade have forced scientists to revise our understanding of the history of the Large Magellanic Cloud.

Astronomers have detected signs of icy interlopers around faraway stars.

Beyond Starlink: The Satellite Saga Continues

SpaceX has engaged astronomers and made improvements, but with other companies set to launch their own satellite fleets, goodwill is not enough.

A combination of new data and tenacity has upended our understanding of the Milky Way’s largest companion.

We make a detour from our usual latitudes to visit a collection of exquisite celestial bubbles lying at lower declinations.

Here’s a different approach to recording deep-sky targets over natural and urban landscapes.

Watch this stunning nebula’s evolution between 1997 and 2010.

Enjoy the first high-resolution panorama of Mars from NASA’s Perseverance rover as well as images from China’s Tianwen 1 spacecraft and the United Arab Emirates’ Hope probe.

The Many Distinctions of Arcturus

The leading light of Boötes rides high in the June sky.

Enjoy dawn and dusk riches during the summer solstice.

What’s in a Name?

A lot, which led to the reclassification of lunar craters.

Working with What You Have

Before you purchase your dream astrophotography rig, consider what you can do with a basic setup.

See what else June's issue has to offer.