My Night in the Stratosphere 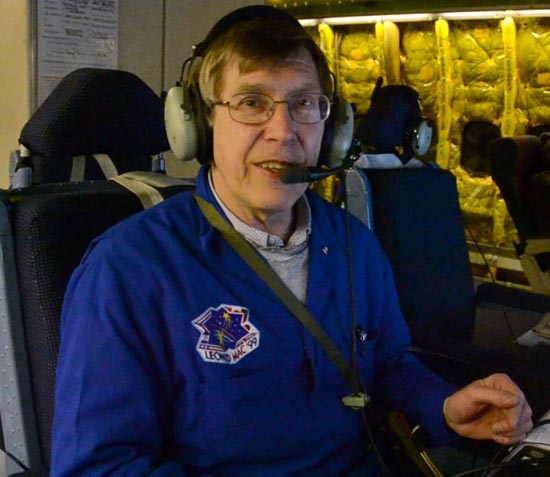 During flight, the interior of SOFIA is very noisy. We all wear these military-grade "cans" — to deaden the loud drone and to communicate with each other.

What's it like to fly on a repurposed Boeing 747 with a huge rectangular hole in its side — and a state-of-the-art telescope peering out through it?

After three years of trying — six attempts in all — I finally got my chance to fly aboard the one-of-a-kind Stratospheric Observatory for Infrared Astronomy. SOFIA is a repurposed Boeing 747SP aircraft that's been modified to observe while flying at altitudes of 39,000 feet (12 km) and above. The business end is a compact, 2.5-meter telescope that peers out into the universe through a hole in the fuselage. It's a big hole, 18 feet long and 13½ high (5.5 by 4.1 m), that gets opened once the plane reaches 30,000 feet.

As detailed in Sky & Telescope's May issue, I flew on SOFIA to find out what kinds of astronomy can be done from the stratosphere. "Plenty," it turns out, and there's a long queue of astronomers waiting to use it. Most have been waiting a long time: the project began in 1997 and took 14 years and $1.1 billion to become fully operational. NASA and the German Aerospace Center (DLR) paid for it, and staff from Universities Space Research Association manage day-to-day operations.

Here are some behind-the-scenes snapshots of what it takes to get SOFIA airborne and its telescope feasting on starlight: