Saturn’s Amazing Rings
Astronomer’s understanding of these beautiful bands has come a long way since Galileo first spied “a case so surprising” in 1610.
By J. Kelly Beatty

How Worlds Get Out of Whack
Several gravitational mechanisms can cause planets to migrate substantial distances from their formation orbits.
By Greg Laughlin

Stonewall Jackson in the Moonlight
In the Battle at Chancellorsville a full Moon may have changed the course of the American Civil War.
By Donald W. Olson?and Laurie E. Jasinski

Exploring the M83 Galaxy Group
ound the tail of Hydra is a collection for deep-sky connoisseurs.
By Les Dalrymple

A Planetary Breakthrough
WinJUPOS eliminates the race against time in planetary imaging.
By Sean Walker 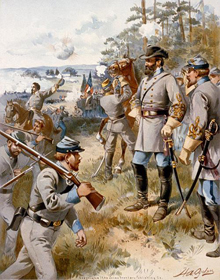 Stonewall Jackson in the Moonlight
View a gallery of images of the Battle of Bull Run, Battle of Chancellorsville, and more.
By Robert Naeye

The Realm of the Nebulae
Some unusual galaxies lie near the Virgo Cluster's eastern edge.
By Sue French