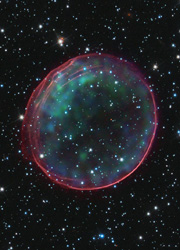 The Great Supernova Race
In the efforts to discover exploding stars, professionals have taken the lead, but amateurs have managed to stay in the game.
By Robert Zimmerman

Back to the Big Bang
A faint signal hidden in the universe's earliest light might reveal what happened in the first moment after cosmic birth.
By Bruce Lieberman

October's Dawn Window for Sirius B
Sirius in October? If you'd like to try for its legendary white dwarf companion — easier to see now than in decades — here's why to set your alarm clock.
By Alan Whitman

Observing the Milky Way, Part II: Scutum to Cassiopeia
The autumn Milky Way is rich in nearby clusters and nebulae.
By Craig Crossen

The Man Who Illustrated the Heavens
H. A. Rey, co-creator of Curious George, turned his talents skyward to demystify the stars.
By Ann Mulloy Ashmore 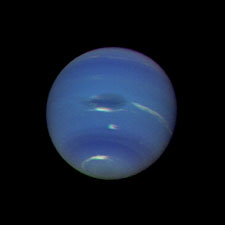 Join the Supernova Race
Read more about the groups involved in the ongoing search for exploding stars.
By Robert Naeye

Spot the Other Blue Planets
Here's how to find Uranus and Neptune.
By Alan MacRobert

Spotting Uranus and Neptune
In the Great Celestial Sea float the ice-giant twins of autumn evenings.
By Alan MacRobert

Drawing the Moon
Sketching lunar features trains you to see more.
By Charles A. Wood

No-Tools Collimation
Here's a simple method for aligning your telescope's optics without lasers or other gadgets.
By Gary Seronik