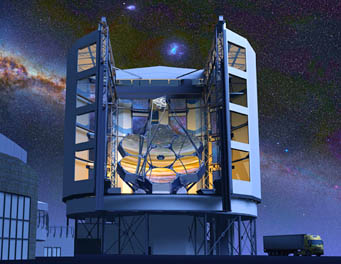 When completed in 2020-21, the Giant Magellan Telescope will have an aperture of more than 83 feet (25 m) — making it the largest optical telescope in the world. For a sense of its scale, note the large truck depicted at lower right.

Robert Zimmerman writes in the March 2014 issue about the construction of the Giant Magellan Telescope, "demonstrating astronomical engineering of the highest order." The mammoth telescope will combine seven 8.4-meter (28-feet) mirrors into a flower-like primary with the resolving power of a mirro 24.5 meters (80 feet) wide.

But the Giant Magellan Telescope isn’t the only behemoth planned for the next decade. The Thirty Meter Telescope (TMT) and the 39-meter European Extremely Large Telescope (E-ELT) should also be seeing first light around the same time.

These two telescopes' primaries differ from the GMT's flower-like arrangement of circular mirror segmnts. Their primary mirrors will be tesselations of 1.4-meter hexagons: 492 for the TMT and 798 for the E-ELT. But like the GMT, the TMT and E-ELT must incorporate adaptive optics to iron out atmospheric distortion of starlight.

The science aims for this class of “extremely large telescopes” are similar, though with subtle variations depending on the instruments attached to the telescopes — each telescope has several detectors (including imagers and spectrometers) under study and/or construction. Among other things, these telescopes will detect exoplanets and investigate their atmospheres, image the first stars and galaxies of the universe, and observe the assembly of galaxies through cosmic time. 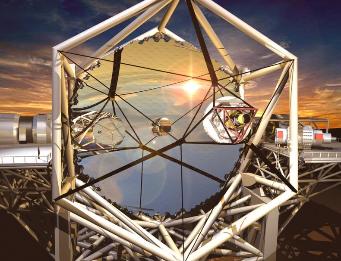