Black holes are completely described by three quantities: their mass, spin, and electric charge — and in real life, the charge is always zero. Sound simple? It's not! 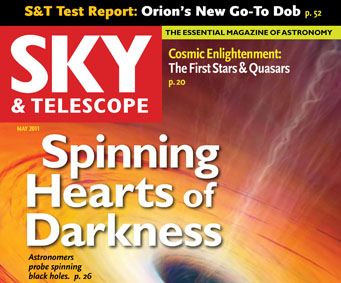 Laura Brenneman, a postdoctoral fellow at the Harvard-Smithsonian Center for Astrophysics, explains some of the ramifications of black hole spin in the cover story of the May 2011 issue of Sky & Telescope. It turns out that although black holes themselves are simple, they interact with the material that surrounds them in surprisingly complex ways.

Unlike stars, galaxies are fairly large compared to the space between them, so galaxy collisions are quite common. In fact, our own Milky Way Galaxy is thought to have devoured dozens of galaxies in the course of its life. When this happens, the black holes at the centers of the galaxies often collide. (See "Cosmic Cataclysms" in the April 2009 issue of Sky & Telescope.) And then, depending on the spins of the two black holes, all manner of different things can happen. 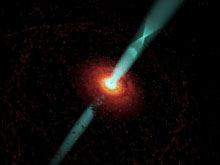 One possibility is that the combined black hole ends up spinning in the opposite direction from its accretion disk, which is thought to result in abnormally active jets. It's also possible for the black hole to be "kicked" out of the galaxy's center — and possibly even entirely out of the host galaxy.

But don't worry about being devoured by a free-floating supermassive black hole. As Laura Brenneman explains in the video interview shown below, the chances of a black hole being ejected from its host galaxy are actually quite small.