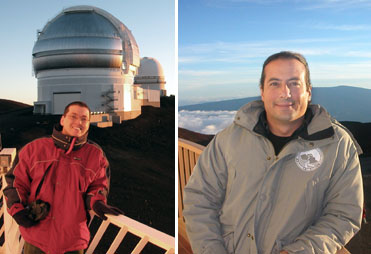 Christian Marois (left) and Paul Kalas (right) led the teams that acquired the first extrasolar-planet images that are likely to stand the test of time.

For most of its history, the study of extrasolar planets has been rife with false alarms. Because of the claimed big discoveries that later withered away under close scrutiny, astronomers have tended to greet major new developments with a healthy dose of skepticism.

Such was the case during the past few years whenever astronomers announced the first direct image of an exoplanet. Since these claims involved fairly massive objects orbiting very far from their host star, scientists wondered if these were bona fide planets or heavier "failed stars" known as brown dwarfs.

In conjunction with his article in the March 2009 Sky & Telescope, Editor in Chief Robert Naeye interviewed the leaders of the two teams that finally achieved the long-standing goal of imaging planets around other stars.

Click the links to hear him speak with Paul Kalas (University of California, Berkeley) about Fomalhaut's planet and to Christian Marois (NRC Herzberg Institute of Astrophysics, Canada) about the three planets orbiting HR 8799.