This is the web supplement to Howard Banich's article "The Determined Observer's Guide to M101," in the June 2013 issue of Sky & Telescope. In it, Banich describes observing M101 with his motorized 28-inch alt-azimuth Newtonian, preparing the sketch shown below at low resolution.

M101 is extraordinarily rich in active star-forming regions, 10 of which have their own NGC numbers. Banich also labeled eight other regions with capital letters A through H.

All of these regions are complex objects in their own right, consisting of many different star clusters and H II emission nebulae. They're similar to the complexes of clusters and nebulae that fill much of Orion, Perseus, or Carina, but on a much grander scale. The most comprehensive survey, by Paul W. Hodge and colleagues, enumerates 1264 H II regions in M101, including 33 just in the region NGC 5462!

Banich and I independently attempted to identify some of the individual clusters and nebulae using the Aladin Sky Atlas, which overlays deep-sky databases atop images from the Digitized Sky Survey and other sources. The task is overwhelming because many thousands of named objects and stars are overlaid, derived from dozens of surveys and professional papers.

Moreover, the regions labeled in Banich's sketch don't have well-defined boundaries. And after examining the original sources, I'm confident that some of Aladin's identifications are incorrect. Click here to see Banich's summary of his M101 identifications. And why not give this a try yourself? 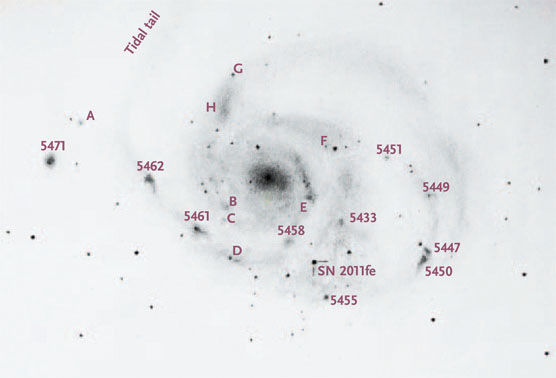 It's easy to identify the regions labeled in Banich's sketch in the CCD image below. Note that young star clusters show up as blue in the photo, while H II emission areas are red. 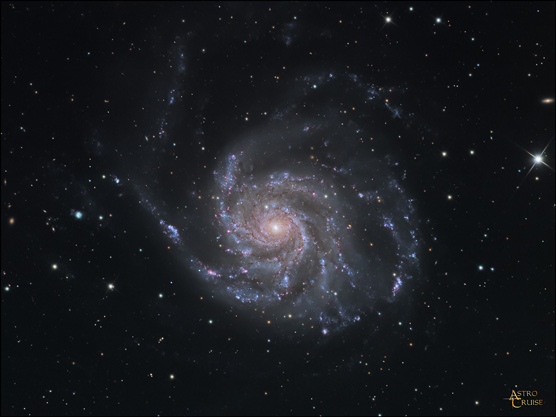 Click the image above to see the full-size original.

How to Stay Warm at Night