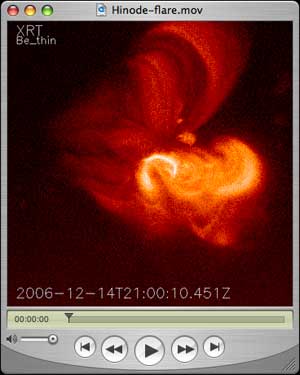 Click on this image to display a 4.5-megabyte QuickTime movie showing the evolution of a solar flare as seen by Hinode's X-Ray Telescope. If you don't already have QuickTime on your computer, you can download a free copy from Apple.

In the August 2007 issue of Sky & Telescope (page 28), Monica Bobra introduces readers to some initial findings from the Hinode spacecraft, an international mission to study the Sun launched in September 2006. The article focuses on imagery from the spacecraft’s X-Ray Telescope (XRT), for which Bobra is a member of the science team at the Harvard-Smithsonian Center for Astrophysics.

Although her article includes many spectacular images, much of XRT’s results are best seen by stringing together individual frames to create time-lapse movies.

For example, a solar flare on December 13, 2006, erupted while XRT watched. Several frames from this outburst accompany the magazine article, but this false-color animation shows before, during, and after the event (4.5-megabyte QuickTime movie). The view grows dark because of XRT’s automatic exposure control, which reduces the exposure times during bursts of very high energy. (All of the linked-to movies are at less-than-original resolution because they have been reduced in size to make the files smaller.)

The article also notes how activity can extend around the solar sphere. This brief animation on December 10, 2006 (2-megabyte QuickTime movie), reveals wispy aurora-like features near the south pole generated by expulsions from an active region near the center of the disk.

XRT is the only instrument aboard Hinode that can capture the full disk of the Sun. On March 19, 2006, it was the lone witness to a total solar eclipse (7.5-megabyte QuickTime movie). The best observers on Earth could view was a partial eclipse. XRT also discerned the planet Mercury transiting the Sun on November 8, 2006 (7.4-megabyte QuickTime movie). This movie shows portions of the 5-hour-long passage of Mercury’s silhouette across the seething solar disk.

If you have the high-speed connection (or don't mind waiting), you can watch a full 12 hours of activity within an active region compressed into 43 seconds (23-megabyte QuickTime movie), and marvel at how the area seems to simmer like a lightning-charged thunderstorm.

For more images and animations from XRT and its visible-light camera, the Solar Optical Telescope (SOT), visit these Hinode websites:

How to Stay Warm at Night