In a fascinating article in the June 2008 issue of Sky & Telescope, astronomer Douglas L. Welch (McMaster University, Canada) explains how amateur astronomers can help professionals observe light from supernova explosions that rocked our Milky Way Galaxy hundreds of years ago. The key is to use CCD imaging to search for light echoes: reflections of supernova flashes off interstellar dust.

The following animation illustrates how this works:

Supernova light echoes are faint, so you'll need to hunt for them from a dark site free of light pollution. Welch recommends using the technique of difference imaging. Basically, you make deep images of large areas of the sky at sufficiently high magnification months apart, subtract earlier images from later ones, and look for wisps of light that have moved between exposures. In his article, Welch describes this technique in detail, shows some real-world examples, and suggests what types of amateur equipment are best suited to the search.

In addition to the article in S&T, you can find valuable information about supernova light echoes on the website of the SuperMACHO project.

Here are finder charts showing the optimum regions to search for light echoes around the sites of these supernova explosions. The inner and outer circles indicate where we should now be seeing light reflected from dust at the same distance as the supernova and 2,000 light-years closer, respectively. Click on the thumbnails to download high-resolution versions. 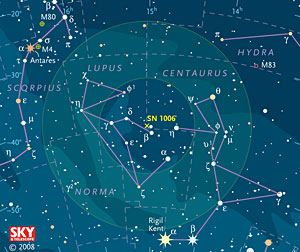 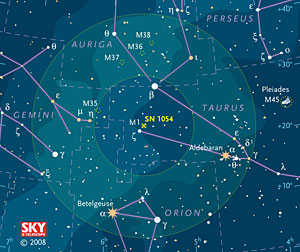 Finder chart for light echoes around Supernova 1054, which produced the Crab Nebula. 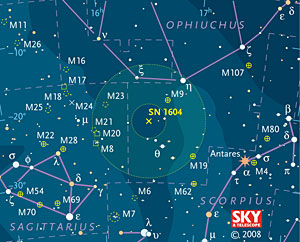 Finder chart for light echoes around Supernova 1604, which was observed by Johannes Kepler. 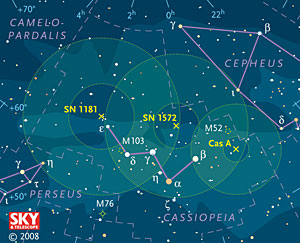 Finder chart for light echoes around Supernova 1181, SN 1572 (which was observed by Tycho Brahe), and the 17th-century blast that produced supernova remnant Cas A.

Interestingly, light echoes (or close analogs) have been observed beyond the visible spectrum. For example, in late 2003 and again a year later, a team led by Oliver Krause (Steward Observatory) used NASA's Spitzer Space Telescope to capture infrared images of the region around Cassiopeia A. Comparison of the two observations revealed several bright knots that appear to be retreating from the blast site at the speed of light. They're not interstellar rockets, but infrared echoes. Light expanding outward from Cas A warms dust as it goes, and the grains subsequently cool by radiating at infrared wavelengths. 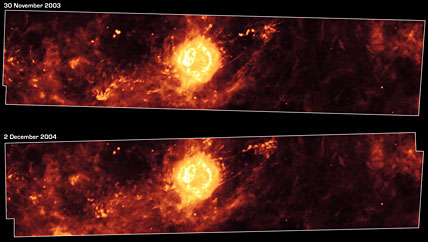 The yellow ball in these false-color infrared images from the Spitzer Space Telescope is Cas A, the remnant of a star that blew itself to bits more than 300 years ago. Comparison of the two exposures reveals clumps of emission at upper right, lower left, and far left that appear to be racing away from the supernova at light speed. In reality, they're different regions in interstellar clouds that are being successively warmed by a pulse of light expanding outward from the compact object at the heart of the nebula. The field is about ¾° wide, with north to the left. Click on the image to download a high-resolution view.

From the geometry of these "heat" echoes, Krause's team concluded in Science for June 10, 2005, that the dust responsible for them wasn't warmed by light from the centuries-old supernova explosion itself, but by a more recent flare from the leftover neutron star.

While the June 2008 issue of S&T was at the printer, an international team of astronomers announced that they'd used observations of light echoes in the Large Magellanic Cloud, one of our Milky Way's satellite galaxies, to estimate the power of a supernova explosion that occurred there about 400 years ago. They did it by combining visible-light studies of light echoes from the blast with X-ray measurements of the expanding supernova remnant, as described in a Chandra X-ray Observatory press release.

And, as the June issue was just beginning to reach subscribers, astronomers using American, Japanese, and European X-ray satellites reported observing an X-ray light echo from an even more powerful explosion: a flare from the black hole at the center of our galaxy! As described in a NASA/Goddard Space Flight Center press release, the 3-million-solar-mass black hole, which is usually quiet, apparently swallowed something 300 years ago that didn't agree with it. The ensuing high-energy belch eventually caromed off a huge gas cloud called Sagittarius B2, which was recently seen to brighten in X rays.

It's pretty neat to think that by watching flashes of light in tonight's sky, we can learn something about cosmic events that happened centuries ago. Happy hunting!