As I said a month ago, I'm not a big fan of buying astro gadgets. I have precious little money to spare, and I don't have enough time to use the equipment that I already own. Even so, I buy a new trinket every now and again.

Last month I finally gave in and purchased something I'd been contemplating half-seriously for six or eight years: a set of 15x70 binoculars. A surprising number of people are now buying these as their first serious astronomical instrument, and I was curious to see what it's like to own them. I've occasionally borrowed big binoculars from other people, but actually owning them, having the leisure to explore their ins and outs, is a different experience. 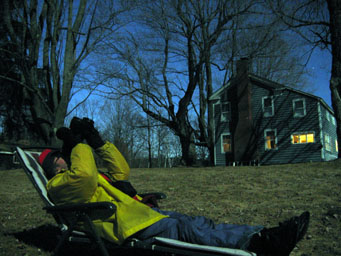 A lounge chair with armrests provides enough support for me to get acceptably stable views through 15x binoculars.

Before anybody asks, no I'm not going to reveal the brand name, for two reasons. I don't want anybody to think that I'm implicitly endorsing one brand when in fact I bought based on the usual combination of research, hunch, and whim. More importantly, I'm trying to assess the whole category, not one particular instrument. I really don't care about all the factors that separate good binoculars from great ones; for my purposes, all decent 15x70 binoculars are the same.

This also gave me a chance to perform a critical comparison of the 10x30's against the 10x50's — something I'd never done before. It's an empirical fact that I've hardly used the 10x50's since purchasing the 10x30's; the benefits of image stabilization matter more to me than the superior light-gathering power of the 10x50's. But just how much difference does that extra 20mm of aperture make?

For viewing stars, there's surprisingly little difference between 10x30's and 10x50's. Sure, there's an odd star here or there that's only visible in the bigger unit, but not enough to matter. For faint fuzzies, the difference is much more pronounced. For instance, viewing the wonderful Leo galaxy triplet (Messier 66, Messier 65, and NGC 3628), the 10x30's showed M66 with ease, but I really had to work to see M65. In 10x50's, both of the Messier galaxies popped right out, and I thought I caught a faint glimpse of NGC 3628, their notoriously elusive companion.

How about the 15x70's? They're in a whole different class from the 10x50's, let alone the 10x30's — so much so that it's almost ludicrous to compare them. Not only could I see M66 and M65 easily, but I got a pretty good sense of their sizes and shapes. And NGC 3628, though still faint, was quite unmistakable. This was in semi-dark skies, measuring 20.8 on the Sky Quality Meter, just twice the natural background glow. NGC 3628 is difficult to see through any instrument under typical suburban conditions.

Turning to the galaxy pair M81 and M82 in Ursa Major, the view was nothing short of stunning — an adjective I'd never think to apply to the view of the same pair through 10x50 binoculars. And I was able to find every Messier object I looked for with only minor effort, including M109 near the Big Dipper's bowl and M98 in the Virgo Cluster, two galaxies that have always given me major problems when attempting the complete Messier list through smaller binoculars.

So are the 15x70's the cat's meow, the perfect answer to all my binocular wants and needs? Not a bit of it! On the contrary, I'm sure that I'll use the 10x30's far more often. How come? That will be the subject for Part II of this comparison.