I'd raised the question of covering asteroid 2006 VV2 on our website earlier in the week, but the other editors were sceptical.

"Tenth magnitude near a waxing gibbous Moon?," they said. "Only experienced observers will be able to see it, and they already have all the information they need. A note in Sky At a Glance is good enough. Besides, who wants to plot charts with stars down to magnitude 11 for an object that's moving a degree an hour? That's like laying seven pages of the Millenium Star Atlas end on end. And we'd have to plot separate tracks for different locations because of topocentric parallax."

But the asteroid kept bugging me. Browsing the usual suspects on the Web, it became clear that nobody had thought seriously about the observing logistics. Just how big a telescope would be needed to see it? How much did topocentric parallax really matter? There were several charts, but none detailed enough to actually find the asteroid. The JPL ephemeris site is superb, and perfectly adequate for people with Go To scopes. But if I wanted to star-hop to the asteroid, I'd have to plot its track myself. And as long as I was going to do that, I might as well share the charts with the public. After all, that's our job. What Sky & Telescope does best — better than anybody else — is observing logistics and charts.

I should have followed my first instinct and started the job on Monday. As it was, I had to scramble madly, and still got the charts up too late for people in Europe to use them for the first really good opportunity, on Thursday night. But thanks to a few critical tips from Roger Sinnott, Grand Master of Celestial Cartography, proofreading by Alan MacRobert, and a hard day of work by Gregg Dinderman, I at least got the article on the Web in time for me to use it. The charts are shockingly crude — I'd rather die than publish them in the magazine. But standards are much lower on the Web than in print, and regardless of all their technical shortcomings, the charts get the job done. 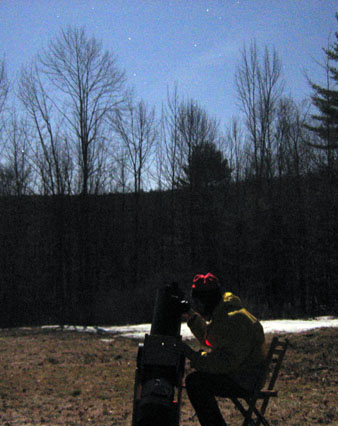 The author searches for asteroid 2006 VV2 by moonlight through his 7-inch Dob.

Thursday night was gratifying in the extreme. Asteroid 2006 VV2 was a fearsomely long star-hop from Lambda UMa, but the chart got me there eventually. I'd made a wild guess when I said that the asteroid would be easy in a 6-inch scope, but apparently I nailed that pretty well. Through my 7-inch Dob, the asteroid required averted vision at 40X, direct vision at 60X, and was plain as day at 120X. Best of all, it was almost on top of a similar-magnitude star when I first found it. I was pretty sure that one of them was 2006 VV2, and I was wondering how to tell which one. A moment later -- doh -- it's the one that's moving, of course. Just a few arcseconds from a reference star, the asteroid's motion was quite perceptible — though slow. What a rush! No matter how careful I am, I never really believe my predictions until I confirm them through a telescope. There are so many things that can go wrong!

It wasn't as exciting last night (Friday), a few hours before the asteroid's closest approach to Earth. It was much easier to see, nearly a full magnitude brighter than on the previous night, and presumably moving faster through the sky. But because it wasn't as close to a reference star, I couldn't see the motion directly. And the suspense of wondering whether I'd done my homework right was nearly gone.

But of course I'll go back and look for 2006 VV2 again tonight, assuming that the clear weather holds. Who knows, maybe I got Charts 1 and 3 right but made a stupid blunder on Chart 5. Maybe JPL's brightness predictions are wrong. The best way to find out is to see for myself.

Here's one observer--not too experienced, with fewer than 2 years under my belt--very glad that you followed your instincts and posted the charts. I had not heard of VV2 until Friday. I wasn't able to haul my 8" dob out until 2:30UT. Facing the moonlit sky, all the branches around my target area in Leo Minor, and the usual bright skies that come with living 10 minutes from the Washington DC Beltway, I thought my chances of seeing this thing were pretty slim.

Just finding Algieba, my starting point for the hop, was a challenge! I was flying blind through the glare, but came the spot I thought the asteroid should be at 2:43 UT. I had never seen an asteroid before, so wasn't sure what to look for.

On a hunch, I kept watching an asterism that looked like a little "7" of 4 stars. Sure enough, after a few minutes, the bottom of the "7" began to move! I was astonished by the speed, though I'm not sure what I expected. It's a strange feeling to see the "fixed stars" moving.

Thanks again--you made my week!

I was glad to see you finally did print charts for VV2. Lately, I find S&T is not where I find information first(although I expect it to be). For VV2 Spaceweather.com had info up well before S&T. This was true for comet McNaught too. I would like to get info from S&T first, but it seems I have to find other sources. Is this what S&T really wants? This sort of info is about observing, something S&T should be a leader in getting info to the astro public.

Tony responds: Spaceweather.com is a magnificent site. I'm amazed that Tony Phillips has the time and energy to keep up with so much that's going on in the sky on top of his basic function of cutting-edge, real-time information about the Sun-Earth environment. But in this arena, I see spaceweather's function as complementary to ours.

Spaceweather gets the word out early, but doesn't worry too much about the practical details. Comets are notoriously unpredictable, so in the case of McNaught, we were very reluctant to send the general public out to view a potentially difficult comet until we had good data about its brightness.

But we definitely slipped in the case of 2006 VV2, which was predictable well in advance. Yes, our charts were available for the few nights of really good opportunity, but if we'd put them out a little earlier, a lot more people would have known about them.