What with one thing and another, I haven't managed to do any observing at all this month. I had high hopes last weekend, but the weather turned cloudy. Still, I took comfort from the weather forecast, which predicted that the cloudy spell would break just at new Moon. It was supposed to turn clear today, Thursday, and stay that way for the coming weekend.

The Great Northern Moose Lodge (marked by the big cross) is just south of the huge dark-sky area that covers most of Maine.

Due to family circumstances, this also seemed like a promising time to visit a true dark-sky site, something I haven't done for more than a year now. Boston is relatively lucky as eastern cities go because we have a huge dark area north of us, covering most of Maine and a smidge of New Hampshire. And while scanning New Hampshire's Clear Sky Clocks, I noticed a promising entry: Great Northern Moose Lodge, a B&B used by members of the New Hampshire Astronomical Society. It's not quite in the really dark area, but it's mighty close. A phone call revealed that they welcome astronomers — enough so they'll climb up a ladder to unscrew the bulb of the streetlight in front of the lodge. And to make things even better, it's right near Grafton Notch, a spectacular area with two major hikes that I've been thinking of doing for years but never got around to. (If there's one thing I like better than stargazing, it's hiking.)

But as the week progressed, the forecast got worse and worse, and it began to look as though tonight (Thursday) might be the only clear night. Was I willing to drive 7 hours round trip, using up a vaction day on Friday, just for a few hours under a dark sky? Mind you, when I say "a few," I'm not speaking figuratively. It's short enough from dusk to dawn even here in Boston, but it's 40 minutes less near the Canadian border — just 11 p.m. to 2:30 a.m. Yikes! 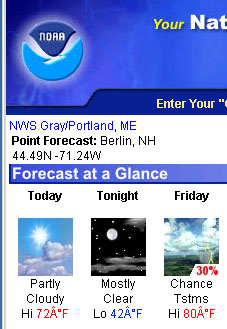 So I woke up this morning completely uncertain whether it would be a normal work day or if I'd be frantically packing astronomy and hiking gear before work and then leaving early to beat rush hour on my way to New Hampshire. The first thing I did after drinking my coffee was to check the National Weather Service forecast for northern New Hampshire. It said that the night would be mostly clear, and also predicted that the temperature would drop 30°, implying decent transparency. (Clouds and haze inhibit radiative cooling.) On the other hand, the fact that it was supposed to be cloudy immediately before and after didn't inspire much confidence. So I turned to the forecast discussion:

THE FORECAST PROBLEM FOR THE NEAR TERM WILL ONCE AGAIN BE THE CLOUDS ... GIVEN THE EXTENT OF THE STRATUS ... WILL NOT BE QUITE SO OPTIMISTIC WHERE THE CLOUDS ARE NOW (SINCE THIS DID NOT WORK OUT YESTERDAY).

Indeed! Sounds like the NWS shares my skepticism about its own forecast. So what do the Canadians say?

Unlike the US, Canada provides a forecast explicitly for stargazers. Most people access it through the Clear Sky Clock, but I prefer to go straight to the horse's mouth. Watching the Candian's forecast of how the transparency over New England would evolve from 8 p.m. to midnight increased my misgivings. I've had pretty good luck sometimes when the transparency forecast is light blue, but green is ominous. Of course, they could be wrong ... but that's the whole point. The weather is obviously unsettled, impossible to forecast with confidence, and no basis for planning a major excursion.

Even so, I almost changed my mind when I checked the Canadian forecast again at noon and saw that it had taken a turn for the better. After all, at the worst I would be clouded out at night and get a nice hike in the next day. But I checked with Lauren, who's laying out the article I just finished editing, and it turns out that she'll need me around all of today and maybe tomorrow. And I couldn't let Lauren down.

Or could I? I'd be tempted to play hooky anyway if the forecast was really promising. As it is, I can stay in town with a clear conscience.

Hello, I am from Costa Rica and here we have 5 months of summer that maybe 2 of those months are all cloudy, and the winter it turns so bad that you can't see the moon in weeks and I understand how precious is a clear night.

I'm glad to see I'm not the only one who sometimes goes for long stretches without observing due to weather and other factors. I don't have much opportunity to travel, so I just observe from my home in suburban Baltimore. Even so, weather, family obligations, the need to get up for work in the morning, and just plain being too tired often prevent me from observing. It was particularly bad this past winter, when I only averaged one session per month, with none at all one month.

On the plus side, it makes the times I do get outside all the more special... 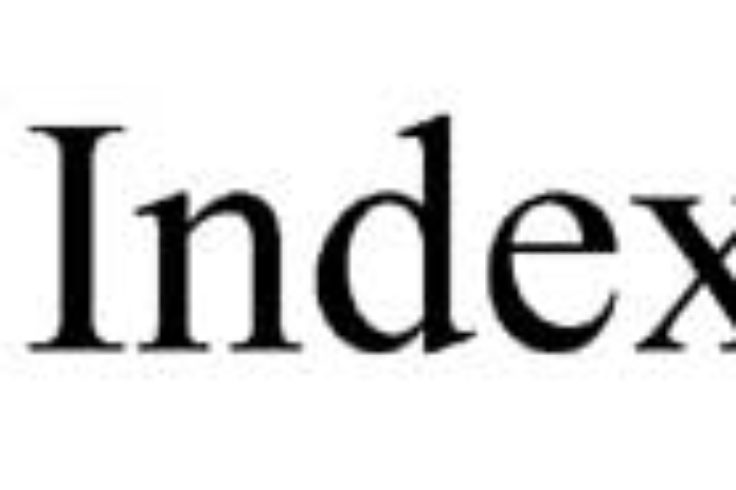 The Chore of Indexing