I'm Tony Flanders, the most recent hire on Sky & Telescope's editorial staff, having started late in 2003. I'm taking over as a blogger from Bob Naeye, who just left to work at Goddard Space Flight Center. All of us here at S&T will miss him sorely, but we wish him great joy at his exciting new job.

I'll be writing about stargazing, or visual astronomy: looking at the universe through telescopes, binoculars, and with unaided eyes. Or in my case with eyeglasses, since I can see only the very brightest stars without them. 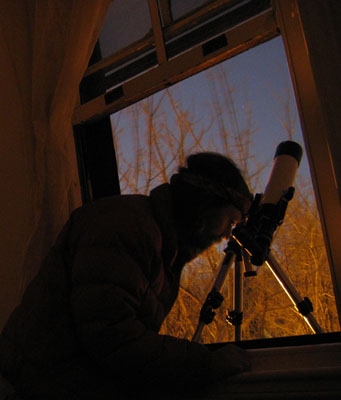 Here's my 70-mm f/6.9 refractor perched on my dining-room windowsill. That's the only way I can get away from the streetlights -- or anyway, above them -- without traveling nearly a mile.

One of the reasons that S&T hired me was that unlike most of the editors here, I still have fresh memories of struggling to master a telescope. It's now been almost exactly ten years since I set out on the project that changed my life: tracking down all of the Messier objects with my newly purchased 70-mm refractor. I started with the big, bright open star cluster M41 on January 28, 1997, looking out the window of my city apartment with a 75%-illuminated Moon, and moved to progressively darker locations as I encountered more challenging objects.

I checked off M79, my last Messier object, under a rural sky shortly before dawn on September 7, 1997. M79 reaches its highest in the early-evening sky in January and February, so I wouldn't have needed to get up in the middle of the night if I had observed it early on instead of saving it for last. But it was probably a wise decision nonetheless; I doubt that I would have been able to see this medium-faint globular cluster low in the urban skyglow when I started my observing project.

Now, with ten extra years of experience under my belt, M79 is immediately obvious in the city through my 70-mm scope, and I can make it out with some effort using 10x30 binoculars. It's still the same cluster, and I still have the same eyes, but I've learned to use them a lot better.

A couple of months ago I started to re-observe all the Messier objects with that same 70-mm refractor. Why repeat something that I've already done? And why use this dinky little telescope when I own a 12.5-inch Dob that shows M79 as a glorious swarm of individual stars rather than a tiny, bright dustball? For that matter, why view the Messier objects at all when I can download magnificent photos of them with a few clicks of a mouse? I'll be answering these questions and more in future blog entries.

Hello Mr. Flanders! I've only been interested in Astronomy for a couple of years, but it all started when I took a college "intro to astronomy" class to satisfy my science requirement for my music degree. I quickly became hooked. Looking at M31 through an 80mm refractor was what really sky rocketed my interest. Later that year I bought a 100mm refractor, and have since been learning everything I can about Astronomy. I've even taken all the astronomy courses in school that I can without actually being an astronomy major. I just recently thought about starting the project of finding all the Messier objects, but some of the very faint ones, I have a hard time finding. I'm in the midwest, and can easily get to a fairly good dark sky. Maybe I need to more carefully polar align my mount? I can't wait to read more about how you accomplished finding all the Messier objects.

Your blog is off to a great start.

I had a 4 1/4" reflector on a heavy, but wobbly mount around 20 years ago. Like you I was under less than ideal skies. But I'll never forget the first time I saw Saturn's rings with my own eyes, or managed to hunt down the ring nebula using averted vision. Some nights I stayed out until the sun came up and caused some REAL light pollution.

I just turned 40 and the urge to get back into astronomy has grown very strong, but I still live in a heavily light polluted area. That photo of you using the little refractor braced on a windowsill is inspiring!

I look forward to following your blog.

Why indeed! The pleiades, Beehive, Mirfak region, Hyades give me a new thrill each time I "point and shoot" w/ my hand held binoculars.

Congratulations on joining S&T. I also live in a fairly light polluted area and was wondering if you have had any experience with any of the pollution filters sold on the market. More to the point do they really work or are they a waste of money. The filters that I have been looking at are on the Orion, Telescope, and Binocular Center website.

Narrowband filters are an entirely different animal; they're tremendously helpful, but only for a relatively small class of objects: emission nebulae and planetary nebulae. For instance, the Owl Nebula (M97) is almost impossible to see without a filter under city skies, but it stands out nicely with the aid of a narrowband filter. Incidentally, narrowband filters are equally useful under dark skies.

Unfortunately, no filter is much help for viewing galaxies and star clusters.

Yo, Tony, I have been observing a long time and have formed some definite opinions about how to best commune with the heavens. I wonder what your feelings are about doing the Messier list with a "go to" scope. Me, I have found that to know the constellations with the naked eye, watch planetary and lunar conjunctions unfold like a slow-motion ballet, and enjoy the sense of perspective and accomplishment that comes with using a beautiful star atlas is what it's all about. Can anybody really experience the same quality of astronomy joy by just letting the telescope do all the work?

Tony replies: To answer that question properly would require a small book. People certainly don't experience the same joy when they let the telescope do the finding. But they may experience a different joy that's equally satisfying, or more so —l for them.

Note that I said "do the finding" rather than "do the work," as you did. I greatly enjoy finding celestial objects, but it's only a small part of all the work that I do. The real effort starts once I've found my target. I'll be talking more about that in future blog entries.

Greetings.
I also love astronomy but find that I'm simply too tired at night (and, with two teenage kids, too busy on most weekends) to set up the scope and use it. As a result, I often go months without eyepiece time and find my interest in the hobby waxing and waning considerably over the years. I suspect I'm not the only one who suffers in this respect - any thoughts on how to overcome evening lethargy?

Tony replies: I have the same problem, especially in June and July, when it doesn't get dark until after my normal bedtime. At this time of year, I find it relatively easy to sneak out for a couple of hours right after supper. Fortunately, my wife never complains about filling in with the household duties when I'm out observing.

As for lethargy, it's sometimes hard to push myself outside. But once I'm out there, the cold air and excitement of being under the stars always jolts me awake again.

I have found this Sky&Telescope -magazine again becauce of you. From 1980 till 1995 I read about every word in it, but then I got bored about those advertising pages.
Being retaired now and living in country side and having truely dark skies at night all that has become back again.
I did read all of yuor blogs from january 2007 to this day in a couple of evenings enjoyingn everyone of them.
I agree with you seeing the night sky with two eyes makes it so real. I have 12x50 and 11x80 binoculars.