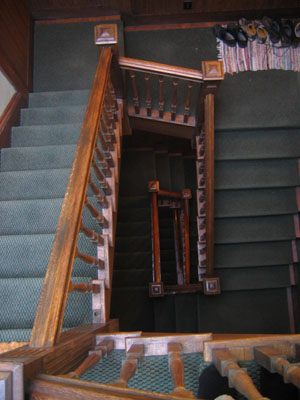 One of the biggest obstacles to observing at my city home is the staircase down which everything has to be carried.

Usually, "serious" stargazing is a long, drawn-out affair for me. First I have to decide which charts and equipment I need, then I gather them from their various storage places, load them into my pack, trot or struggle down three flights of stairs, and travel (usually by bicycle or car) to the appropriate observing site. And when I'm finished, the whole process has to be reversed.

There are exceptions, however. I wasn't expecting it to be clear this morning, but when I awoke, Jupiter — one of the few "stars" that I can see even without eyeglasses — was shining through the bathroom window. So I decided to take a quick look at nearby Nova Scorpii 2007, which I had observed from the same spot just five mornings earlier. Epsilon Scorpii, the jumping-off star, was too low in the light-pollution soup to be visible naked-eye, but it was easy to locate with my 10x30 binoculars, even through a window and storm window — as was Nova Scorpii 2007. Having spent some time memorizing the field on my previous observation, it was immediately obvious that the nova had dimmed about a full magnitude.

So I put away the binoculars, having spent all of two or three minutes on this little project. But it's good that I did it right off the bat, because by the time I'd finished breakfast, the sky had clouded over.