Cambridge, MA, is an unusual place. It houses the oldest college in America and also some of the oldest factories. The public schools reflect that heritage — they include plenty of professors' kids and a fair number of children whose parents are illiterate. A quarter of my daughter's classmates speak a foreign language at home, some children of graduate students, some economic refugees, and everything in between.

I've been quite busy with the Cambridge Public Schools over the last couple of weeks. Last Friday I gave a talk on astronomy to a class of 3rd and 4th graders, and last night I manned a telescope at a star party for another school. Both events were whopping successes. It sounds corny to say so, but astronomy's appeal is universal. 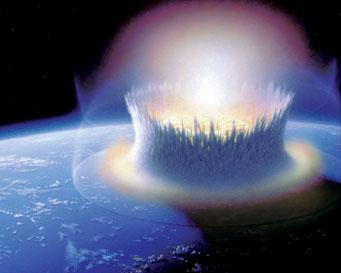 I know Casey, the 3/4 teacher, because my wife was her full-time assistant for two years. Casey told me that some of her students have trouble staying focused, so I picked a topic that's sure to grab anybody's attention: collisions in the solar system. Most of the kids knew that the craters on the Moon are caused by meteors, they offered many creative suggestions when I asked why there aren't craters on Earth, and they were suitably impressed when I showed them a photo of Arizona's Meteor Crater — especially when I told them that I'd visited it with Carla (my wife and their former teacher) and Rajani (my daughter, and buddy to many of them). Don Davis's painting of the Chicxulub collision (from The New Solar System) proved surprisingly fruitful. I'd thought of it mostly as window dressing, but the children asked lots of perceptive questions about the phenomena that it shows. If I hadn't cut off discussion, I'd probably still be there right now. 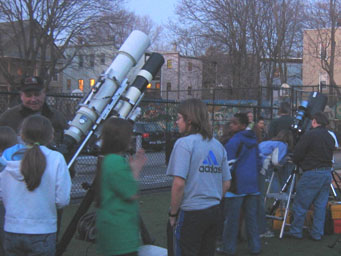 The star party last night was great too. The weather could hardly have been more cooperative; the clouds parted just after sunset and covered the sky again just when the event was scheduled to end. Most of the kids there were from the Amigos school, which offers a dual-language immersion program, alternating between Spanish and English on a weekly basis. It attracts Hispanic immigrants and well-educated Anglos who are eager for their children to learn a second language. The air was filled with cries of "Mira — la luna." Saturn, of course, was the biggest hit, and Venus and Mizar were also popular.

As I know well from the stories my wife tells, teaching children is always exhausting and often frustrating. But when all is said and done, it's the most worthwhile activity that anyone can engage in.

Teaching children maybe the highest calling, and have the respect of many, but it also one of the lowest paid professions, the biggest headaches, and one of the few professions where you are expected to buy supplies out of your own pocket for the classroom.

The only parents you hear from are the ones who swear and curse you for the way you treat their child. Whether you are not challenging their little prodigy — never mind the fact that they don't do the homework and goof off in class.

Yes, there are the occasional parent who is grateful, but often it an immigrant family, or an newly arrived Asian parent who come from a culture that truly respects teachers.

You were very fortunate to have had the experience you had, with kids and parents from such highly motivated backgrounds.

Okay, hyperbole or not, teaching isn't the most worthwhile activity anyone can engage in. After all, if somebody doesn't farm some food, all the teachers in the world aren't going to do much when they (and their students) all starve to death. And teaching isn't an end - it's a means to an end. After all, if all anyone did was teach (or be taught), then no one would discover anything new and we'd be stuck where we are in knowledge. Teaching brings students "up to speed" on what is known, potentially sparking their interest to go beyond what is known - that is the end to which teaching drives.

Teaching may be a noble thing, because the physical rewards are scant. But not the most worthwhile, not by a long shot.

Tony comments: It's absolutely true that farmers are utterly essential and universally underappreciated. Moreover, though teachers work like dogs for little pay, farmers work much harder for even less.

Having said that, I still stand by my statement. I think I take a much broader view of teaching. It's not just bringing a student up to speed: filling him or her with knowledge, like a bottle. The Latin root of the word educate is ex-ducere, to lead out. And that's what education is all about — drawing forth the potential of every human being. It's also not restricted to people who get paid to teach; in fact, the lion's share of education is done by parents. Farmers in particular spend a great deal of time and effort teaching their children how to carry on their own work.

Last Spring, i gave a SETI talk to advanced 5th graders. These kids totally ate it up. I've also brought a solar scope out to the same group. Clouds prevented everyone getting a look. But when i explained how the scope worked, they tested the limits of my knowledge with their questions. Fabulous.

In Michigan, we have public schools, but also charter schools. The charter schools get state money, and must uphold the state standards. But to get into one, a child must have at least one parent who fills out the 15 page application. So, these kids have two advantages. They have a parent who both can fill out such a form, and who did fill out the form. So, when the teacher sends our child home with a note asking for a conference, there's a parent who will make the time and engage with the teacher to find solutions to issues. Since every child has this, it makes for less disruption in class, too.

I wish i knew what to do with the public schools in the city.