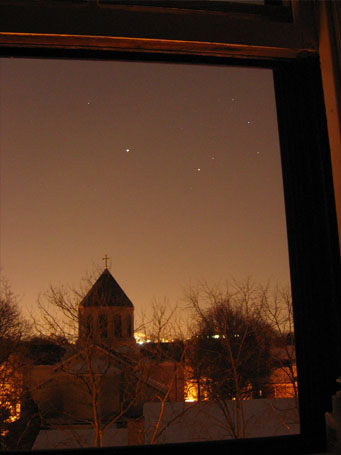 Every morning since the beginning of February, I’ve looked for Jupiter and Antares outside my bedroom window when I first wake up. Each week this pair gets to the same spot in the sky a half hour earlier. But at this time of year, when days are lengthening fastest, sunrise happens nearly 15 minutes earlier every week. The net effect is that if I look just when the sky is beginning to get bright, Jupiter and Antares seem to advance quite slowly from one week to the next.

By the beginning of March, even I (early riser though I am) was rarely getting up much before sunrise. But now that daylight saving time has arrived, I will again have splendid views every clear morning of Jupiter and Antares in a dark sky — insofar as it ever gets dark here in the city.

I remember watching Antares just like this ten years ago, when I was working on the Messier list. I knew that a whole host of Messier objects followed right behind this brilliant star, in the constellation Sagittarius, but I didn’t manage to catch them until June 7-8, 1997. That was one of the most memorable observing sessions of my life, a night when a whole new world opened up for me. I observed 34 new Messier objects, but it was the quality rather than the quantity that was so remarkable. It helped a lot that I was under a reasonably dark sky, where I could appreciate the objects properly. 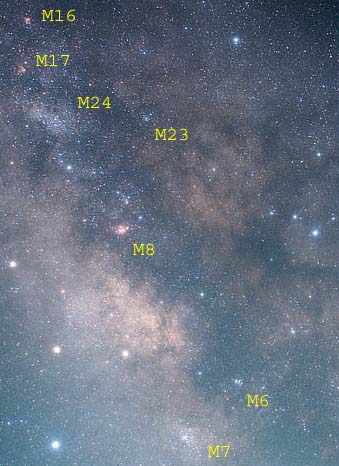 I started on a subdued note, chasing down the seven globular star clusters in Ophiuchus. Several of these are quite grand through big scopes, but they’re a little monotonous through my little 70-mm refractor — some bright, some faint, but all little fuzzy balls of light. Then I hit the first object in Sagittarius — the open cluster M23. Wow, what a beauty! A glorious, rich swarm of stars, perfectly suited to my little scope. Anywhere else in the sky, it would be famous. But it’s so overshadowed by its glorious neighbors that people often overlook it when listing the celestial wonders of this region.

Next stop M8, the Lagoon Nebula, a great cloud of light surrounding a cluster of brilliant stars. I was totally floored; I’d never imagined anything like it. Then down to the tail of Scorpius, with M7 and M6 just rising out of the trees. What a pair! After the Pleiades, these are probably the two star clusters that show best through small scopes and binoculars. Then up to the heart of the Milky Way, to M24, M17, and M16, each magnificent in its own way and each totally different from the others. That sequence remains to this day my very favorite field in the entire sky.

Seeing any one of these showpieces for the first time would have been a life-changing experience. Seeing them all back to back was overwhelming.

For those of us at mid-northern latitudes, these objects are teasing us right now, poking above the horizon just in time for us to catch them through a telescope, then vanishing into the light of day before we’ve had a chance to get a good look. Just as Antares keeps one step ahead of dawn, so Sagittarius lags one step behind it. And so it will remain until June, when the Sagittarius Milky Way suddenly flips from being an early-morning object to a late-evening object. Which isn’t a great feat, considering how short the nights are at that time of year. 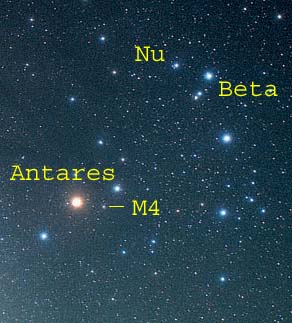 Meanwhile, we have the head of Scorpius to admire in the morning sky, and it’s no slouch either. The combination of color, brightness, and situation makes Antares one of the sky’s greatest showpieces for the unaided eye. This red supergiant is one of the largest stars known, big enough to hold Mars’s orbit inside it. It’s also a famous, though challenging, telescopic double star. If Antares proves too hard to split, Beta Scorpii (Graffias) eight degrees to its upper right is easy at 40X in a small scope. And Nu, just a little left of Beta, combines the best of both worlds. Magnifications as low as 10X split it into two components, and high powers (combined with a steady atmosphere) show that each of these is a tight double.

Last but not least, Messier 4, the closest globular cluster to Earth, lies a little more than a degree to the right of Antares. It was a real challenge for me to make it out when I first viewed it from my city home — just a barely perceptible highlight in the bright glow along the horizon. But under dark skies, it quickly became one of my favorite showpieces. Its one of just two globular clusters within which my little refractor can make out significant numbers of individual stars. The other one, Messier 22, is in (you guessed it!) Sagittarius.