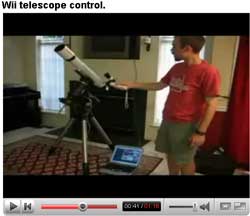 Now that's a 21-century way to control a telescope.

Over the past few months I've seen several news reports about how Nintendo's Wii video-game console is breaking new ground in socialization. The game system isn't limited to couch potatoes playing war games until dawn. It's being used for such group activities as virtual tennis championships in pubs and bowling leagues at retirement communities.

Word wound its way to us this week about one enterprising amateur astronomer who devised a system to use the Wii's wireless controller to steer his Go To telescope. You can see his brief video demonstration on YouTube, and join in the discussion over at Cloudy Nights.

Gee, I'm only a smidgen disappointed that I bought a PlayStation 3.