I was up early this morning, awakened by a deluge of freezing rain that made me lose power, threatened to flood my basement, and dragged tree limbs crashing to the ground in my yard. It's the kind of raw weather that makes me wistful for a little of the warmth on HD 189733b. 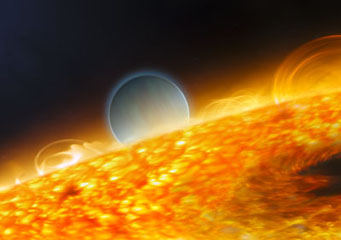 An artist's portrayal of the "hot Jupiter" orbiting just 3 million miles from the star HD 189733.

That place, it turns out, is one of the most interesting exoplanets known. Discovered in 2005 using Doppler spectroscopy, HD 189733b is a"hot Jupiter" that circles just 3 million miles (0.03 astronomical unit) from its host star. This means it's hopelessly too close to its sun to be spotted separately with current technology. However, by good fortune, it is a transiting exoplanet that alternately passes in front of and behind its sun every 2.2 days.

Recently astronomers have cleverly exploited this geometry to learn something about the Jupiter-size world's composition. First they record the combined spectrum of the star and planet together — and then, once HD 189733b has ducked from view, that of the star alone. Subtract one from the other, and — voilà — a crude spectrum of the planet emerges.

This week two teams of astronomers report, based on infrared spectra taken with both the Hubble and Spitzer space observatories, that there must be water on HD 189733b. This great news for everyone struggling to understand the 300+ exoplanets now known, because it brings us one step closer to finding a habitable world. I wouldn't call this particular planet "habitable" — its surface temperature near 2,500°F (1,400°C).

Dynamicists believe that this and other "hot Jupiters" didn't form so close to their host stars. Rather, they assembled farther out in their protostellar disks and then got dragged inward through interactions with the remaining dust and gas around them. No doubt countless of just-formed planets have been lost this way. HD 189733b likely survived either because its disk dissipated just in time or because it didn't extend all the way in.

In any case, it's not hard to imagine water being part of this planet's makeup. What's more puzzling is the signature of carbon dioxide there too. So I asked exoplanet expert Sara Seager (MIT) what she makes of this result. "The apparent detection of CO2 is very surprising," she told me, because it wouldn't be present if all of HD 189733b's gases were in chemical balance. "We think it comes from photochemistry, caused by the star's ultraviolet rays breaking up molecules that then reform as different molecules."

For the record, the two just-released papers involve Spitzer observations by Carl Grillmair and others (appearing in December 11th's Nature) and Hubble spectra collected by Mark Swain and others (accepted for publication in Astrophysical Journal Letters.

But don't try to wade through these; instead, download this highly readable overview by researchers Giovanna Tinetti and Jean-Philippe Beaulieu.

Meanwhile, here on my little corner of planet Earth, the local utility company tells me I might have my power back sometime this weekend. By then my house will likely be frozen over — not something that could never happen on HD 189733b!

[… This week two teams of astronomers report, based on infrared spectra taken with both the Hubble and Spitzer space observatories, that there must be water on HD 189733b. This great news for everyone struggling to understand the 300+ exoplanets now known, because it brings us one step closer to finding a habitable world. I wouldn't call this particular planet "habitable" — its surface temperature near 2,500°F (1,400°C)…]

A very good observation here about exoplanets. This brings up two interesting questions to me.

1.How did life originate on Earth? Was it via spontaneous generation from non-living matter? Was it via the Creator?
2.Does the answer to question 1, influence how astronomers think about finding life on exoplanets or in our own solar system?

I have looked at four book stores for your latest magazine with the month to month skywatch pages for 2009.
Could you tell me where I can find this magazine ?

Thank-you for this article! It's way cool to finally know that there are other planets similar to ours. the combination of water and CO2 could very well mean life, if it wern't so hot. But nevertheless, a stepping stone. and thanks for the Is. 45:18 ref. "Isa 45:18 For thus says the LORD, who created the heavens (He is the God who formed the earth and made it, He established it and did not create it a waste place, but formed it to be inhabited), 'I am the LORD, and there is none else.'"

A NY Times article, reprinted Dec. 11 in our local (San Jose, CA) paper, was uncommonly accurate. It stated that the Hubble was used to compare near-infrared light from the star alone and the star plus planet. "The difference between the two spectrums (sic) revealed the light emitted from the planet...."

The article included the artist's portrayal with the following caption: "In a picture taken by the Hubble Space Telescope, a planet is shown where cabon dioxide has been discovered in its atmosphere. The planet orbits another star."

I don't know if the NY Times or our local paper added that caption, but it certainly illustrates the "expertise?" of much of our science reporting.

Before we get too carried away about this exoplanet observation that H2O may be present in its atmosphere and thinking about possible earth like worlds, we should consider that the host star is a K2V star, it is known to be active and spotted. Thus the host star may be more active than our Sun (i.e. solar flares and magnetic field activity) and its temperature likely near 4830K. I used my astronomy spreadsheet for some quick stats. For its distance about 0.03 AU from the host star, HD 189733b could be a 2 Jupiter mass exoplanet orbiting a class K main sequence star near 0.75 solar mass and thus have a potential mean velocity of nearly 149 kilometers per second in its orbit (2.2 day period). Our Earth orbits the Sun near 30 kilometers per second. Just because it may have H2O does not make this a place like home.

Well, Glenn, if some of the religious nonsense I am seeing in these comments ever infiltrates the articles, I'd suggest you look for this magazine in a Christian bookshop.

I am really disappointed that people will foist their religion on readers, who come to this site for find facts and science. It sullies the experience of reading it for me, even though it is not the fault of staff. The quality of the magazine seems to suffer simply by association.

FYI posters. Some comments here bring to my memory Apollo 8 mission in 1968. When they came around the Moon and observed Earth rise, they read allowed from Genesis 1:1-4. Can you imagine the uproar this would create today?

I'm not quite sure why finding water on an exoplanet is so shocking. Water is to be found all over our solar system and, as it's a fairly simple molecule made up of hydrogen (greatly abundant) and oxygen (not uncommon), I'd be surprised to find any solar system that didn't have solid bodies containing water.

Isn't this nice vision has been published upside-down here? On the spaceflightnow.com this hot water Jupier looms from behind its star exposed over it - not below. 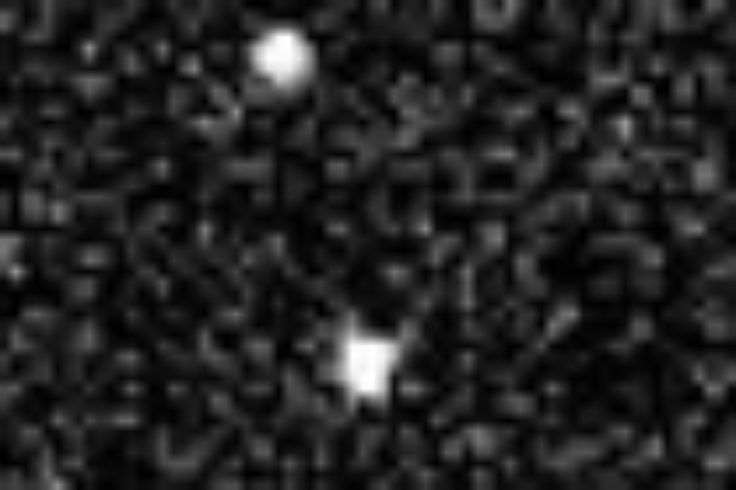 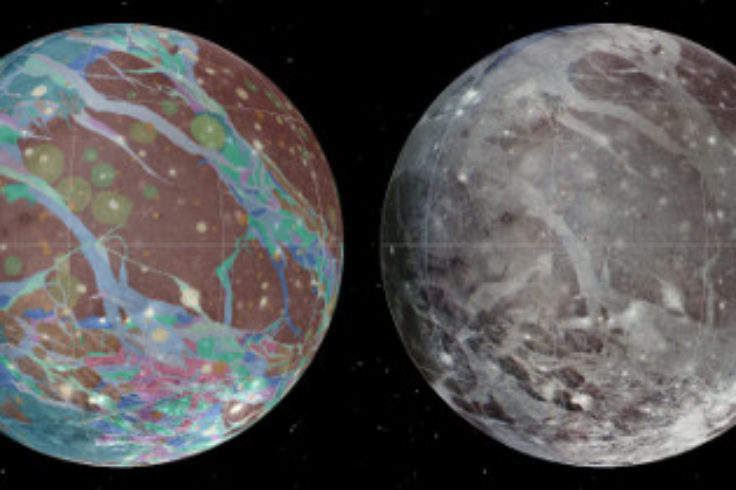