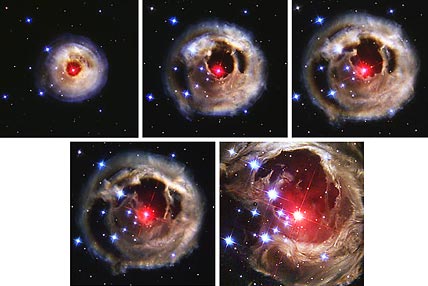 The Hubble Space Telescope’s Advanced Camera for Surveys captured these images (approximately true color) of the expanding light echo around V838 Monocerotis. We see an expanding pulse of light from the early-2002 outburst reflecting off nearly motionless dust clouds. The first four shots were taken on May 20, September 2, October 28, and December 17, 2002. The fifth frame was captured on February 8, 2004.

In early 2002, a relatively undistinguished star named V838 Monocerotis embarked on a light-speed rise to fame. It flared twice in February and March before fading away, but the aftermath of its outbursts continues to intrigue astronomers and mesmerize the public. The series of five images above were captured by the Hubble Space Telescope. They show the outward journey of the light from the flares.

The casual viewer might look at these frames and think they show an expanding shell of glowing dust and gas moving away from V838 Mon. In truth, the flareups are merely illuminating progressively larger spheres of preexisting, stationary material in space. We are seeing a "light echo" bouncing off this material, the same way echoes of a sound can be heard bouncing off objects near the sound's source.

In a January article in Astronomy and Astrophysics, Romuald Tylenda of the Torun Centre for Astronomy in Poland argues that the material is distributed too asymmetrically to have been puffed off from the star even long ago. Instead, the expanding sphere of starlight is apparently lighting up interstellar gas and dust that just happened to be in the area.

While V838 Mon is the most photogenic star of its kind, it is not unique. Both Sagittarius and Andromeda have stars that put on similar public outbursts. A study led by Dipankar P.K. Banerjee of the Physical Research Laboratory in India found the signature of rare aluminum oxide molecules in both V838 Mon and V4332 Sgr. Banerjee and his team propose the name "quasinovae" for this new class of objects.