In a few months I'll be teaching my high-school students about cosmology and, in particular, how Edwin Hubble discovered that the universe is expanding. That's how most of us learned it, anyway, but it's not the whole story. In fact, it's not even correct. 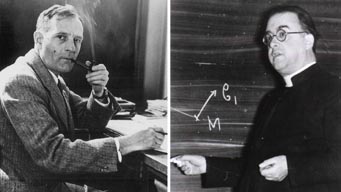 During the 1920s, astronomers Edwin Hubble (left) and Georges LemaÃ®tre both came o the realization that the universe is expanding.

Hubble came to his game-changing revelation when he compared his distance measurements of a few dozen galaxies (or "spiral nebulae," as they were then called) with prior observations by astronomer Vesto Slipher, who'd analyzed their spectra and found they were racing away from us at various speeds. In 1929 Hubble published "A Relation between Distance and Radial Velocity Among Extra-Galactic Nebulae" — not mentioning Slipher at all, by the way — and forever transformed how we view our universe.

The problem is that Hubble wasn't the first to come to this conclusion. Two years earlier, a Belgian priest and cosmologist named Georges Lemaître had used Slipher's redshifts along with earlier, less precise distance estimates to reach the same astounding conclusion. But few took notice at the time, because Lemaître published his findings, in French, in the little-known journal Annals of the Scientific Society of Brussels. Nor was he a self-promoter. 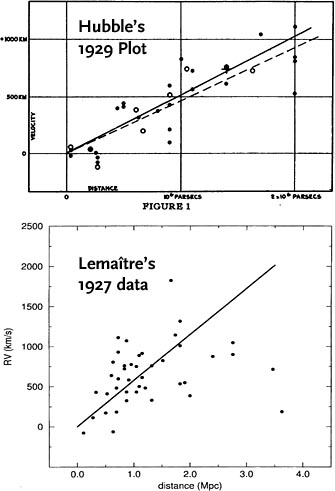 Two takes on the expansion-rate of distant galaxies, plotted as their distance versus their recession velocity, as deduced independently by Edwin Hubble and Georges LemaÃ®tre. Click on the image for a larger view.

A Jesuit priest who trained at the University of Cambridge, Harvard, and MIT, Georges Henri Joseph Édouard Lemaître was more theorist than observer. At the time he was preoccupied with showing that Einstein's concept of a static, eternal universe was untenable. A static universe was contradicted by Einstein's own general theory of relativity unless an artificial-seeming adjustment was applied (Einstein's "cosmological constant"). Lemaître used the sparse data then available to derive expansion rates of 625 and 575 km per second per megaparsec (or Mpc, about 3¼ million light-years), with the difference depending on certain assumptions. Hubble's value, put forward two years later, was 530 km/s/Mpc.

Lemaître's analysis wasn't available in English until 1931 when, at the invitation of British astronomers, it appeared in the Monthly Notices of the Royal Astronomical Society. But the English translation omitted several key paragraphs, a critical equation, and a footnote about the expansion rate he'd derived. So for all these years credit for discovering the expanding universe has gone to Hubble, and the all-important expansion coefficient is known as the Hubble Constant — even though Lemaître was the first to publish a number for it.

The saga might have ended there. However, earlier this year astronomers reopened the Case of the Missing Paragraphs. First came an assertion by amateur historians Michael Way and Harry Nussbaumer, posted online in April and later published in Physics Today, that Lemaître should get the discovery credit.

The sleuthing took a darker turn when Canadian astrophysicist Sidney van den Bergh suggested that the translator of Lemaître's manuscript had intentionally omitted the critical equation and text, so as to preserve Hubble's discovery claim. In June, South African mathematician David Block went so far as to suggest that Hubble himself might have been involved in the censorship. (Hubble was notoriously territorial, as evidenced by his snub of Slipher.)

Now we know the real story, thanks to detective work by Mario Livio (Space Telescope Science Institute). In the November 10th issue of Nature, Livio describes how he dug into the Royal Astronomical Society's archives and unearthed a previously unseen letter from the Belgian priest to William Marshall Smart, editor of the Monthly Notices at that time. Having translated the treatise to English himself, Lemaître notes, "I did not find advisable to reprint the provisional discussion of radial velocities which is clearly of no actual interest . . . ."

"Lemaître was not at all obsessed with establishing priority for his original discovery," Livio explains. "Given that Hubble’s results had been published in 1929, Lemaître saw no point in repeating his own more tentative earlier findings in 1931."

Still, I hope science historians and astronomy teachers everywhere will now give more credit where credit is due. And perhaps someday, as Block exhorts, NASA or the European Space Agency will see fit to launch a Lemaître Space Telescope to honor this visionary yet modest cosmologist — who, by the way, went on to propose what we now know as the Big Bang Theory.

I read years ago in New Scientist about the Big Rip theory to explain a quickening red shift. If the speed of light slows with time since the Big Bang in proportion to the mass of the electron increasing; this would stabilize increasingly heavy metals with time as an obvious red shift is produced. Sound waves are conducted by whole atoms and cannot be conducted in a vacuum, is like light 22 billion years from now.

Thanks for promoting this historical wrong. However, it clearly states in both the Physics Today and the arXiv articles that Michael Way and Harry Nussbaumer are in once case a "research scientist" and the other an "Astronomer" -- Dr. Nussbaumer has also published an entire book on this subject. Best Wishes.

Lemaître deserves to be mentioned, but Hubble made a better job of it and deserves most of the credit. Kind of like Leif Ericson and Christopher Columbus. Sure, Ericson was first to North America, but what did he do about it, who did he tell? Columbus was 500 years late, but he followed up.

In Cosmos 30 years ago, Carl Sagan had a whole section devoted to red shift and Milton Humason's contribution. Neither Hubble nor Lemaitre got a mention.

While Hubble did observe a relation between the distance of a star and its redshift, he never claimed that the redshift was due to the expansion of the universe.

Neither Hubble nor Lemaitre were the first to discover that the universe is expanding. The Bible talks about the expansion of the universe 9 times in Job 9:8, Psalm 104:2, Isaiah 40:22, 42:5, 44:24, 45:12, 51:13, Jeremiah 10:12, and Zechariah 12:1.
I also recently read a book (The Grand Tour: A Traveler's Guide to the Solar System, page 199) that claims that the earth was not discovered until 500 (yes, FIVE HUNDRED) BC! Yet, Job talked about the earth floating in space in 2000 BC (Job 26:7).
The Bible is a very unique book; it records the true account of origins (which is not the big bang), many scientific facts which have all been confirmed, and has no contradictions (even though it was written by 40 different authors over 1,600 years); but most of all, it tells us how we can be reconciled to the very Creator and upholder of the universe.

I hope that this will be a call to other astronomers to study what the Bible says for themselves; I know that this is greatly needed!

There is allways a christian fanatic from the USA to comment off topic.

We still have a long way to go for undesrtanding the Universe, the "who is who wars" are slowing Science down. If scholars are so ego prone, real investigation is delayed.

My opinion only, not puting down any one in particular. YanLu

Since the article's topic is who first reported the expansion of the universe, Janessa's comment is not "off topic" at all. Moses wrote the Bible book of Job around 1473 B.C.E. Job 9:8 and the other verses Janessa references even fit with the remarkable finding that the rate of universal expansion is accelerating. The Grand Designer is even now "stretching out the heavens," as the more humble than Hubble priest Lemaitre would no doubt agree.

Janessa, interesting comments. The expanding universe is not 100% solid ground despite what S&T posts. Reports like
'Quasars again defy a big bang explanation' JOC 24(2):8-9, 2010 don't make the press releases. Marcus Chown in New Scientist reported that QSOs closer to earth (6 billion LY distant) should have light variation effects that may take a month to change and the more distant QSOs (10 billion LY distant or more) should show about a two month time dilation effect due to big bang expansion of the universe. None of this time dilation effect has been observed. This raises the question that the QSOs observed are much closer to earth so their redshift numbers or z numbers cannot be related to cosmological expansion of the universe. As John Hartnett reports in JOC, QSOs offer no support to the big bang model because of the time dilation effect that is missing in their light records. This is just one of many problems with the expanding universe interpretation.

Attributing scientific merit to an English translation of a Hebrew adaptation of a creation myth passed on orally from generation to generation seems shaky ground to say the least. There are many interpretations of the “original” Hebrew text, but a scientifically accurate description of the universe (let alone the suggestion that it prophesies the big bang theory) is not one proposed by many scholars. May I therefore suggest that in future we concentrate on the science and leave the interpretation of creation myths for different fora. Do the “theologians” not understand how offensive this evangelising is to followers of other faiths?

Rod,
An interesting discussion on the research behind Marcus Chown's report can be found at http://www.physicsforums.com/archive/index.php/t-113862.html.
Most notable points:
1. Very little is known about the physics behind the variability of AGNs,
2. Time dilation was confirmed in the power density spectra of the light curves of gamma-ray bursts and also in distant supernova decay profiles.
The latter supports the cosmological expansion of the universe; which is furthermore strengthened by numerous other (independent) threads of research. Also, studies of quasar host galaxies at high redshift support the consensus that quasars are at cosmological distances.
The conclusion appears to be that we do not understand the physics of AGNs very well. Nevertheless, I agree that it is a shame that this work is not more widely publicised as it highlights a substantial hiatus in our understanding of the universe. But in all likelihood, I don’t think it will turn out to be the ticking bomb underneath the big bang theory - just like Halton Arp’s claims about the nature of quasars (deja vu). However, time may prove me wrong - now there’s an exciting thought!