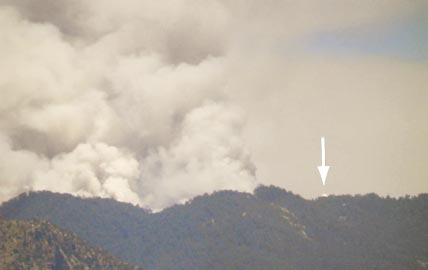 Forest fires blaze near the dome of Steward Observatory's 61-inch Kuiper Telescope (arrowed). This picture was taken a mile from downtown Tucson; the scene was about 35 miles away.

After 10 days, firefighters are getting the wildfire northeast of Tucson, Arizona, under control — and have saved the telescopes of the University of Arizona's Steward Observatory from destruction.

The Aspen Fire, which has consumed more than 30,000 acres of forest and 300 buildings since it began on June 17th, threatened to destroy the two 60-inch (1.5-meter) telescopes, two 40-inch telescopes, and others on Mount Lemmon, as well as the 61-inch Kuiper Telescope and others on Mount Bigelow about four miles (6 kilometers) away.

"The fire came right up to the perimeter" of the Mount Lemmon facility, says telescope operations manager Robert Peterson. Helicopters dumped water to beat back the flames' advance. "We were under battle there for four or five days. The fire completely encircled the observatory. We had some spotting fires within the compound, but all of the buildings were untouched. We're going to go up and clean the optics this weekend."

The fire also advanced to within a half mile of the Mount Bigelow facility. "We're very lucky they both survived," says Peterson.

These close calls come five months after wildfire wiped out Mount Stromlo Observatory in Australia after record heat and drought. The Tucson blaze follows several years of drought and fires across the American West — including the 30,000-acre Bullock Fire that climbed up a different slope of Mount Lemmon and threatened the telescopes last year.