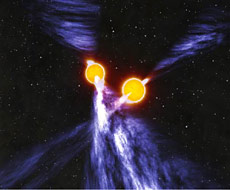 This schematic illustration (not to scale) shows two pulsars — rapidly spinning, highly magnetized neutron stars — orbiting each another and spraying one another with energetic particles. The two are actually very far apart compared to their sizes. In a true scale model, if the pulsars were the sizes of marbles, they would be about 750 feet (225 meters) apart.

The only known binary pulsar is giving astronomers a new perspective on the powerful winds that stream from rapidly spinning, highly magnetized neutron stars.

Announced shortly
following its
discovery in 2003 with the Parkes 64-meter radio telescope in Australia, the double pulsar system known as J0737–3039 has scientists wondering how two spinning neutron stars get along in rather cramped quarters. Sited in Canis Major, the system consists of a 22-millisecond pulsar (A) and a 2.7-second pulsar (B) separated by only 800,000 kilometers — twice the distance separating Earth from the Moon. With two extremely dense spheres (a teaspoon of neutron-star stuff contains about as much mass as all the people on Earth) circling one another in just 2.4 hours, the system's potential as a relativity-testing laboratory was immediately apparent. But now, as new observations roll in from the Green Bank Telescope in West Virginia, other aspects of this tightly wound system have put Albert Einstein in the back seat — for the moment.

Yesterday, Anatoly Spitkovsky (Stanford University) provided one example of the new physics that this unique pulsar pair is bringing to light. At a high-energy astrophysics conference taking place this week in New Orleans, Spitkovsky presented a state-of-the-art, three-dimensional computer simulation of the paired pulsars. In that model, a highly energized magnetic wind of charged particles continuously surges from pulsar A, approaching light speed and blasting the magnetosphere surrounding pulsar B. "This is much like the solar wind hitting Earth," explains Spitkovsky: "The magnetosphere of B shields the star in the same way Earth's magnetic field deflects solar wind."

However, the magnetosheath — the zone wherein pulsar B magnetically deflects pulsar A's furious wind — warps with each rotation. This periodically allows pulsar A's plasma to cut through pulsar B's protective barrier, Spitkovsky says. The model may explain an irregular modulation within pulsar B's spectrum that radio astronomers have discerned when pulsar B eclipsed pulsar A (the system's orbital plane is nearly edge-on as seen from Earth).

Interestingly, computer simulations may be the only way to "view" such phenomena if more systems like J0737–3039 aren't detected soon. According to general relativity, precession will tilt each of its constituent pulsars’ magnetic poles away from Earth in the next few decades — temporarily making the system invisible to terrestrial radio astronomers and putting Einstein in the driver's seat again.