Planetary geologists don't know yet how or when Charon came to exist, but this much is certain: Pluto's largest moon has had a rough time of it in the eons since.

High-resolution images of Charon, taken by New Horizons during its historic July 14th flyby but only recently transmitted to Earth, show an enormous system of fractures girding the moon's midsection. It extends at least 1,000 miles (1,600 km) — four times the Grand Canyon's length and twice as deep in spots — and it likely continues onto Charon’s far side.

The canyon system shows up in earlier images relayed to Earth soon after the flyby, but the new views reveal critical details about how this fracture system might have formed. It has the look of a huge tear, the kind crustal rending seen on Earth (the East African Rift, for example) and Mars (Valles Marineris).

"It looks like the entire crust of Charon has been split open," observes John Spencer (Southwest Research Institute), who serves as deputy lead for the mission's geology, geophysics and imaging team. Such wholesale extension might have occurred, the New Horizons team speculates, if Charon once had an interior ocean of water that expanded as it froze long ago. The overlying crust would have cracked wide open to accommodate the increased volume.

Whatever the cause, the faults and canyons indicate some kind of global geological upheaval in Charon’s past. To the south of the fracture system lies a flat plain, provisionally named Vulcan Planum, that bears far fewer impact craters than do other regions of Charon. This means it must be quite a bit younger. One possible explanation is that, assuming the crust ruptured, watery brines gushed from the interior under tremendous pressure and flowed over the surface — a process geologists call cryovolcanism.

Meanwhile, the new images are showing more and more detail inside enigmatic red-stained depression at Charon's north pole. One early speculation held that the reddish material is a veneer of organic compounds, synthesized from methane that escaped from Pluto and precipitated onto Charon. But the new images suggest that most of the reddish terrain is bounded by a high-standing basin rim — hinting that some or all of it might have come from Charon's interior.

As part of yesterday's image release by NASA, New Horizons team members note that even higher-resolution images of Charon will be arriving in the weeks and months ahead. In the meantime, they've assembled those in hand into a 3D flyover that you can view by clicking on the frame below.

And don't forget to check out the latest S&T.com blog by Alan Stern, the mission's principal investigator. 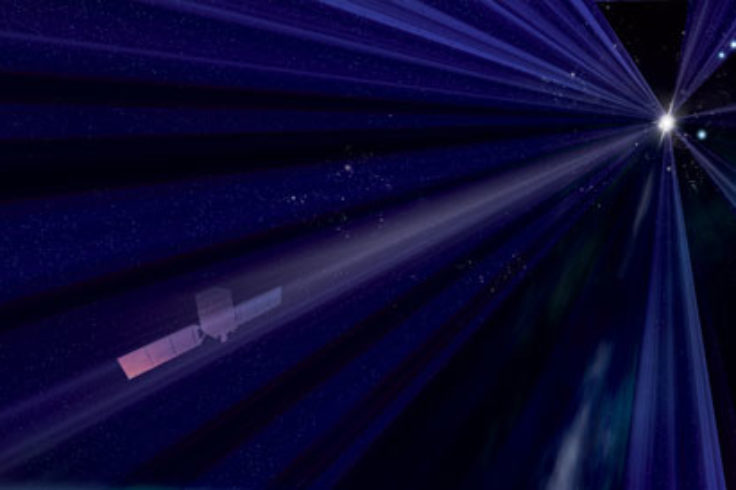