Is the comet dying just three days before its closest pass by the Sun? Despite the increasing heat, its nucleus seems to have stopped producing new material. 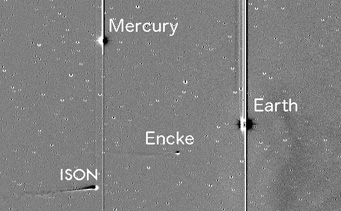 Comets ISON and Encke as seen by the camera on the STEREO-A spacecraft that's monitoring the solar wind. Click image for movie of images from November 19–23. The images have been processed to highlight changes from each frame to the next. Note the slower, more massive-looking clouds blowing from ISON.

Comet ISON (C/2012 S1) is nearing the climax of its 14-month saga since discovery. Far inside the orbit of Mercury, it's dashing sunward with just three days to go before perihelion.

What will emerge after perihelion into the December dawn? A naked-eye marvel, a binocular-only target for amateur astronomers with good charts, or nothing at all?

Comet ISON has been closely monitored at the IRAM millimeter[-wave] telescope in Spain by Israel Hermelo (IRAM Granada) and myself (Caltech/NRAO) for the last 6 days. We observe consistent, rapid fading of the molecular emission lines between Nov. 21 and Nov. 25 by at least a factor of 20 (likely more). This may indicate that the nucleus is now at best marginally active or that... it no longer exists.

...What we're observing are the HCN molecules emitted within about 1 hour of the moment of observation. In other words, our data show what's going on with the comet [nucleus] essentially "now" and not hours or days ago [as is the case with visible light].

To which Jakub Cerny comments,

I am afraid that there is rather "little hope" for comet C/2012 S1 (ISON). Parent molecules have very short lifetime, thus they are a good approximation of the current activity level of a cometary nucleus. Even if there is no nucleus, we will continue to observe the comet on STEREO images [as in the movie at the top of this page] for a day, two, or even a bit longer.

The comet may even still brighten a bit since it is approaching the Sun, and even a "cloud of dust" will reflect more light in such a situation. But a dramatic decrease in molecules' emission lines while comet is quickly approaching the Sun suggests that the nucleus is no longer active.

Too soon to panic, we say, but there are other ominous signs. ISON failed to brighten much as it was disappearing into the dawn a couple of days ago. It gave off a big dust release around the 19th, perhaps hinting of disintegration, followed by less dust production despite the increasing heat. And by the 22nd there were reports that the nucleus's center of brightness was lagging behind its predicted position by about 5 arcseconds, as if most of the light was now coming from trailing rubble.

Meanwhile, even as it's hidden in the Sun's glare for most Earthly observers, ISON is entering the view of solar observatories in space. Several of these are watching the Sun from various different directions far from our home planet.

A few days ago ISON entered the very wide view of NASA's STEREO-A, one of two twin craft nearly on the far side of the Sun from us. Here's the spectacular movie, four days long (November 19–23), of Comets Encke and ISON making their way with tails flapping in gusts and waves of the solar wind. See the labeled frame at the top of this page. Read more about the movie and comet tails in the wind, from Karl Battams of NASA's Comet ISON Observing Campaign (CIOC).

NASA plans many studies of ISON, or what's left of it, around perihelion date. Here's a schedule of when NASA's fleet of solar craft will be watching, and instruments on each that will be used:

Be patient; data from these missions may take hours or days to be streamed to Earth.

Lastly, on Thanksgiving Day when the relatives are gathered, set the living-room computer to display NASA's Google+ Hangout: Comet ISON Live. The hangout will run for 90 minutes around perihelion, from 1:30 to 3:00 p.m. EST (18:30–20:00 UT) November 28th. NASA is billing it as "Fire vs. ISON: Watch the Epic Battle Live." Beats football, say I.

I was easily able to see Comet ISON with 10x50 binoculars on the morning of Mon Nov 18, 2013 near Spica. I was NOT able see the comet on the mornings of Sun Nov 24 or Mon Nov 25 with 10x50 binoculars under perfectly clear skies with mild moonlight (last quarter moon) to my back. I scanned the skies from 20 minutes after Mercury rose till almost dawn, but no sign of Comet ISON. This article is consistent with my visual observations.

Only optimists can be disappointed! On things like this, the news media tries to make everyone optimistic. I would have loved to seen a really good comet - it's been awhile - but maybe if it really is dying, it will do us the favor of killing media astronomy hype for at least a few years.

Why is this video edited at the point the solar blast reaches the comets?

What edit - its not edited. It only includes the frames that were available at the time - for more recent images see the Stereo website.

according to stereo images and videos,mercury and sun are mentioned on opposite sides of earth !!is this a simple naming error or does it actually prove geocentric theory??

Kaushik, check out this graphic that shows the location of the STEREO-A spacecraft. From its line of sight, the Earth appears in between the Sun and Mercury. No violation of the heliocentric model!

ok thanks a lot steve for that clarification,iam still a novice and always learning more things.i wondered why nobody else raised an eyebrow and must be an alternate explanation for that.this is what they call a different perspective of a situation