Be sure to tip your stovepipe hat today in honor of the 200th anniversary of the birth of Abraham Lincoln. "Honest Abe" has become one of the most iconic U.S. presidents, revered in countless monuments and other honors. 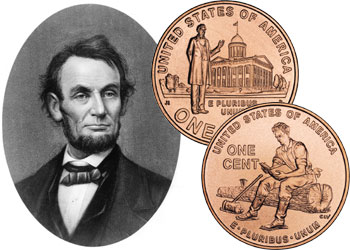 Among the tributes marking the 200th birthday of Abraham Lincoln are a series of new one-cent coins from the U.S. Mint, soon to appear in coin jars across the country.

Among them happening today is the official release of the first of four redesigned one-cent coins. Four new scenes will replace the view of the Lincoln Memorial in Washington, D.C., that has graced the back of the penny for the past 50 years. Two of them are pictured here; to see the others, visit the U.S. Mint (or watch your news tonight).

Lincoln's life has been well documented with numerous biographical accounts. It turns out that some tales have an astronomical bent. If you've been a long-time reader of Sky & Telescope, you probably know of them from articles written by Donald Olson and his colleagues.

The March issue of S&T — now available on newsstands — includes an article by Olson and Laurie Jasinski that summarizes several celestial connections to our 16th president. Click through to the Beyond the Printed Page article to find links to a pair of Olson's articles about Lincoln as well as another tidbit of Lincoln lore that didn't fit into the March issue.

Today also marks the 200th birthday of Charles Darwin, so you might also want to help celebrate Darwin Day with the rest of the world.

The Lincoln Memorial graced the reverse of the penny for 50 years, not 100 years -- in 1959, the Memorial design replaced the "wheat" penny, which originated in 1909. One still finds an occasional wheat penny in circulation.

Oops. You're quite correct, and I should have known better, since I still take the "wheatbacks" out of my change. I amended the text.

Yes, the obverse (front) was changed from the "Indian Head" to the Lincoln design for his centennial in 1909 (maybe this was what you were thinking of initially, Stuart?), and the reverse was changed from "wheatback" to Lincoln-Memorial-back in 1959 for his sesquicentennial. Now, the back change for the bicentennial. I wonder if they're already thinking about what change to make in 2059, when the penny's face value will be worth a tenth or twentieth of its minting cost. I think they'll have to redefine the currency (like France did in, what, 1960?--1 N[ew]F = 100 O[ld]F) well before then, if we don't go to 100% digital currency first.

Due to the truly astronomical number of pennies minted, there must be more images of Lincoln out there than any other person to have ever lived. In fact, I wonder if there have been more Lincoln pennies produced than any other single, unique object on earth. Any thoughts?
(True, this has nothing to do with astronomy, but it's interesting to contemplate.)